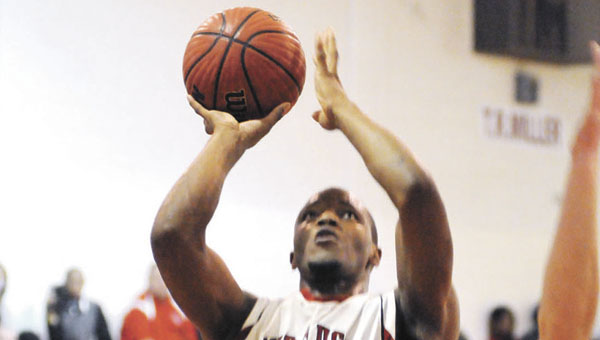 Andalusia capped a three-game losing streak on Monday night with a 82-45 victory over T.R. Miller on Richard Robertson’s Court for senior night at AHS.

Getting a win after a short losing stretch was good for the team, Bulldogs coach Richard Robertson said.

“We made some mistakes (Monday night), but we played better than the last two weeks, maybe longer than that,” Robertson said. “T.R. Miller isn’t a bad basketball team. They’re well-coached. Coach Ron Jackson is a good coach. Every school he’s been to, he’s won a state championship.”

The Bulldogs improve to 15-12 on the season, and will visit Brantley in regular season action tonight.

Andalusia lost to Ashford on the road on Jan. 20, at home against Headland on Jan. 24 and then on the road against Northview (Dothan) on Friday night.

“It might have been the last game at home this year,” Robertson said, “but we’re going to still keep trying winning.”

Bulldogs senior guard Jacard Townsend played his last home game with style. He capped the night with a put-back dunk with 2:23 left in the ball game and finished the night with 30 points and 23 rebounds.

Andalusia won the tip at the hands of Townsend, and Jones managed a jumper at the start.

Flowers passed to AHS senior guard Lakelyus “Fathead” Adams on transition and the Bulldogs went ahead 8-3 to finish a 6-0 run.

The Bulldogs led 18-10 going into the second period.

Andalusia took advantage of its size and speed in the inside game, taking a 27-14 lead on a pass from Flowers to Townsend to Sam Byrd for an easy bucket.

Byrd got another bucket and a 3-point play try later to give his team a 29-14 edge.

Andalusia led 39-20 at half time, and the second half was just as eventful, if not better.

The Bulldogs finished a 10-0 run with 2:06 left in the third period, forcing T.R. Miller to take a time out to regroup.

Andalusia’a Jalen Cross got a jumper to give his team a 56-33 lead, and Jones made the front-end of a pair at the tail-end of the period to give the Bulldogs a 61-34 lead going into the fourth.

During the fourth period and in addition to Townsend’s put-back dunk, Andalusia seniors Devante Morrisette and Josh Doster got some points to help lead the Bulldogs to outscore the Tigers 21-11.

Morrisette got a drive and a basket, and then completed Andalusia’s scoring for the night with a 3-point play.

Doster’s first points for the Bulldogs came from beyond the arch, and in response, the crowd went nuts.

Mark Bryant led the Tigers with 13 points; and Darrion Salter had nine points.

“As long as we’ve still got a chance, we’re going to work,” Robertson said.

Andalusia coach Bennie Shellhouse was nothing but smiles in his efforts to describe how his seniors played on Monday night.

“Man, what a great senior night,” he said. “They all played well. They were doing what they were asked to do.”

The Lady Bulldogs shot out to a 5-0 lead early in the first period thanks to a 3-pointer by senior guard Alexis Horton, who scored her team’s first 10 points of the game.

AHS senior Shi’Amber Townsend got her rebounds going on the offensive end and got a put back to cause a 3-point play to give her Lady Bulldogs a 13-6 lead.

Alison Daniels, also a senior, drove to the basket and improved the Lady Bulldogs lead to 15-6.

AHS senior Alectricia Barnes got a put back later and Andalusia led 19-6, and Horton’s steal and drive down the lane put the Lady Bulldogs ahead 21-6 to force a T.R. Miller time out with 37.8 seconds left.

T.R. Miller went on a 6-0 run during the second period, but couldn’t catch up to Andalusia’s lead, and trailed 37-18 at half time.

The Lady Bulldogs had smooth transition play that was the result of steals, rebounds and opportunities on the defensive end.

During the fourth period, senior Latrexius Trawick found Townsend in the paint and the Lady Bulldogs went up 58-34.

From there, Andalusia took the game and ran away with the scoring, leading by 30 at 74-44 at one point during the fourth period.

Horton led the Lady Bulldogs with 30 points and had nine assists and six steals; Daniels had 10 rebounds; Townsend had a double-double with 18 points and 13 rebounds; and Barnes had nine points and five rebounds.

“You could tell they love the game of basketball, and they’ve been playing together since they were in second and third grade,” Shellhouse said about the seniors. “The credit goes to them. They really played hard (Monday night).”