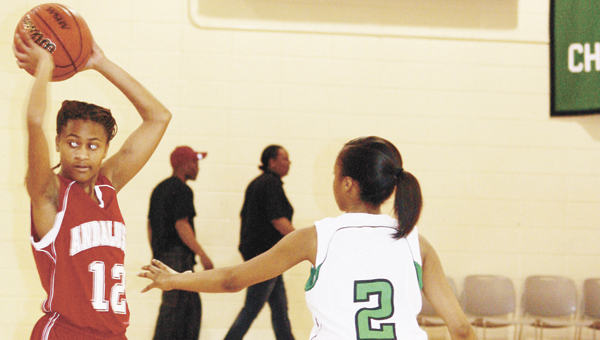 Andalusia’s Alectricia Barnes looks for an open player during her team’s 63-49 win over Brantley. | Kendra Bolling/Star-News

Andalusia’s Lady Bulldogs won their 21st straight ball game on Tuesday night, with a 63-49 victory over Brantley at BHS.

This win surpasses the 1988 girls team and seals a new record, which won 18 straight ball games.

Brantley led 17-11 after the first period, and Andalusia trailed 31-21 at half time.

“Like I told them, the opponents are not our problem. Our problem is internal,” AHS coach Richard Robertson said. “We’ve got to find a way to not make so many critical mistakes.

“We’ve got to have five working together at all times,” he said.

Andalusia outscored Brantley 17-11 in the third period, and AHS had opportunities to seal the win, but missed crucial free throws late in the fourth period, Robertson said.

“Everything that transpired (tonight) was because of break downs,” he said.

Andalusia falls to 15-13 on the season, and will visit Opp on Friday night to close out the regular season.