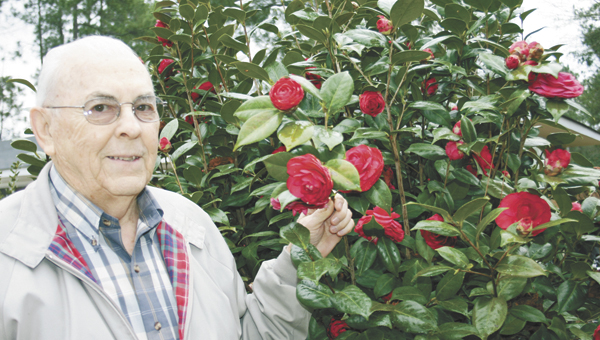 Herb Carlisle stands beside his camellias in his yard in the Bellwood subdivision, which were rooted from cuttings from the yard of the late Ollie B. Brown. | Stephanie Nelson/Star-News

With temperatures in the 70s in January, it stands to reason plants and trees are a bit confused – with some blooming as much as a month early.

Norma Riley-Goolsby, a Covington County master gardener, said the area’s unseasonably warm “winter” is at the root of the problem – pun intended.

“Winter hasn’t really been ‘winter,’” Goolsby said. “The warm temperatures have everything confused.”

Covington County is located in zone 8a on the Plant Hardiness Zone Map, where the lowest temperature on average is between 10 and 15 degrees.

And with a few more months left before the danger of frost is over, plants that have bloomed early might find themselves in trouble. Flowers could freeze and fall to the ground.

“Things will continue to bloom through the warm weather, which makes for a pretty picture, but if we have a hard freeze, they’ll be hurt,” Goolsby said. “I’m sure, overall, they’ll be fine, but things may look bad for a while.”

Goolsby said azaleas, which normally burst their pink, red and white flowers in March, are blooming.

“I haven’t looked to see if the big ones are budding, but I have seen some of the smaller varieties making an appearance,” she said. “Hopefully, the blooms will hold out until Easter, but it’s hard to say what things will do.”

Japanese magnolias, with their pinks and purples, are in full bloom – several weeks earlier than the expected late February.

Other plants that have been spotted already showing off their spring colors are forsythia, daffodils and trillium, as well as jonquils and irises.

However, there is one flowering bush right on time – camellias. With their vibrant reds, dusky pinks and brilliant whites, this Southern landscape staple is peppering lawns throughout the area.

Today, Punxsutawney Phil will predict if winter will last for six more weeks. If recent temperatures are any indication of what’s to come, it looks to be a pleasant six weeks of spring-like weather. Today, the local high is set at 78 degrees, with a 20 percent chance of rain. Over the weekend, temperatures will average 75 degrees; however, there is a 50 percent chance of rain Friday; 60 percent on Saturday and a 40 percent on Sunday.

“All in all, it seems like things are blooming early to me, but I’m not Mother Nature – it’s all her decision,” Goolsby said.