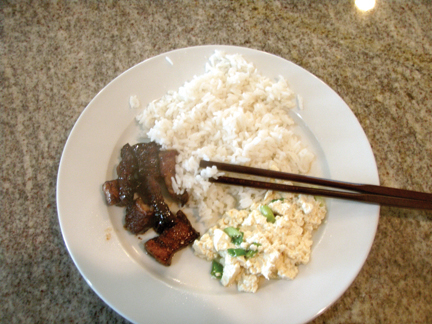 Chinese dishes, like this stir-fry, are easy to make. Connie Anderson/Star-News

The dragon is the fifth sign of the Chinese zodiac and is regarded as an auspicious symbol, which stands for power, good luck, success and happiness. In ancient times, the Chinese New Year was considered the time to honor ancestors and heavenly deities, but today, it is time to organize family gatherings and family feasts. Many Chinese travel far to return to their families so trains and airports are packed during this time.

We were listening to NPR recently, and they were talking about a new Chinese cookbook called The Cultural Revolution Cookbook by Sasha Gong and Scott D. Seligman. Gong had been a young girl during the Cultural Revolution, and these recipes are the ones her family ate during those times. There was not much food, but they used what they had, and the food was simple, but tasty. I decided to give these recipes a try since I pretty much had everything in my pantry except the pork belly or pork shoulder. As you will note, there are very few ingredients, and all are easily obtainable.

(This dish was easy in the Cultural Revolution since it did not require oil, which was strictly rationed.)

¼ scallion (spring onion) (From our garden.)

Sprig of cilantro or parsley (At this time of year, you should have both in the garden.)

Beat the eggs and add 1½ cups water and salt as desired. Mix well. Cut scallion into small pieces. Put the mixture of eggs and water into a heat safe dish with a cover. Add the remaining water to the wok and bring to a boil. Place the covered dish in the wok. Then cover the wok, decrease heat to medium and simmer 10 minutes. Sprinkle the custard with the scallion and drizzle with sesame oil; garnish with the cilantro or parsley. Serve.

Tofu with Scallions and Sesame Dressing

(This dish is low in fat and high in protein.)

Shred the scallion into small pieces by cutting on a bias. Rinse the tofu; put in a microwave safe serving platter; warm in the microwave one minute or heat gently in an oven. Cut up the tofu into 1½ inch cubes, sprinkle with scallions, sesame oil and salt. The Chinese soaked the tofu in hot water to warm (about 10 minutes) since during the revolution there were no microwaves or even an oven.

Chairman Mao loved his “brain food,” which was a traditional dish in his native Hunan and was considered “brain food.”

1 pound pork shoulder (This dish was traditionally made with pork belly, which is much fatter.)

Cut the pork into cubes, 1-inch to a side. Smash the unpeeled ginger. Heat the wok and add the oil. When the oil begins to smoke, add ginger, then the sugar. When the sugar is dissolved, add the pork; stir-fry until the liquid evaporates. Then add soy sauce, cinnamon and wine. Mix well, and cover tightly. Decrease the heat to medium and simmer for 30 minutes.

Rice is a good accompaniment to the pork dish.

These recipes were all done on the same day, and our favorite was the “Brain Food” or the pork belly dish. The pork belly really caramelized in the sauce and was wonderful. The other two dishes were very similar and pleasant tasting, but nothing to rave about. The tofu gave us much protein, so that was good! We like things spicy, so perhaps I should have added a pod or two of pepper to the tofu and some hot pepper flakes to the custard?

Gong Xi Fa Ca (wishing you prosperity) in this Year of the Dragon!