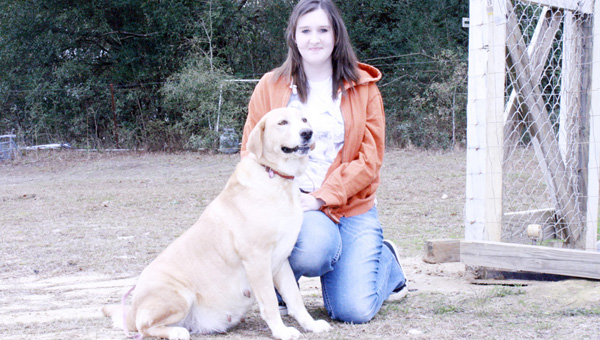 It has been said, “we can judge the heart of a (girl) by her treatment of animals,” and if that’s the case, a 16-year-old Opp girl has a “heart of gold.”

At age 13, a trip to the pound changed her life.

Mock has teamed up with Boothe Veterinary Clinic in Opp and Jones Veterinary Hospital in Andalusia and created the “Forgotten Friends Foster Group.”

“They call me if they have a dog they can’t find a home for, and if they are going to have to put it to sleep,” she said. “We’ll go and get it and find it a good home. Sometimes people bring them to me if they can’t afford to take care of them anymore. I also agree to take them back if they aren’t compatible or if something happens — that’s my promise.”

“I felt like I was called to take care of animals,” she said. “And since I started, I’ve rescued 200 or more dogs.”

Mock said she typically has two bigger dogs at a time or a litter of puppies that she’ll take care of until she can find a new home for them.

“It’s not that hard to find a home,” she said. “They don’t usually stay more than a week.”

However, mom, Leslie Ivey said if dogs do stay longer, “we’re committed to them.”

Their most recent rescue dog is Nadie, a lab-collie mix, who is pregnant with puppies.

“The father of the puppies is a white English,” Mock said. “We received her when a family — who had her for five years — decided to give her away because she was pregnant.”

When the puppies are old enough to be weaned from the mother, Mock said they will be given away to a good home, and so will Nadie.

Mock’s “calling” is something she hopes will turn into a career one day.

“I want to be a biologist,” she said. “I’m undecided on where I want to go to school.”

“I’ve learned a lot in the three years that I’ve been doing this,” Mock said. “I’ve learned about the different breads of dogs and how to take care of them.”

Her parents are “proud and very supportive” of her quest.

“I’m glad she works for what she wants to do,” Ivey said. “She’s very much in to conservation, and she’s really responsible. I’m blessed to have her.”

Mock’s rescue group is almost entirely funded by her family and donations that come from individuals, she said.

“We do have people who donate money for shots and food,” Mock said. “But we do pay for a lot ourselves.”

To help raise money to pour a concrete slab, which Ivey said would provide more “a sanitary environment” for the dogs, a “Puppy Love” fundraiser will be held Feb. 11, beginning at 10 a.m. at Sharp Edge Beauty on West Covington Avenue.

“We hope to raise at least $500 to build the new kennels,” Mock said. “We’ll be selling dog treats, baked goods and crafts. Some things will be valentines and doggie-themed.”

Anyone interested in donating money for the kennel build, pet supplies or food, can contact Mock at 488-9009.

LBWCC kicked off its 2012 baseball season against Enterprise State Community College. Above: Fans watch contently as the game... read more