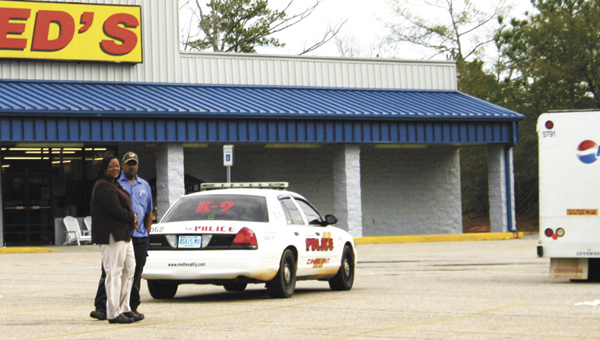 Police are still searching for a black male who allegedly robbed a Pepsi deliveryman at gunpoint Friday morning.

Sgt. Jody Scott with the Andalusia Police Department said officers responded to the parking lot in front of Fred’s Dollar Store around 7:30 a.m.

Scott, lead investigator on the case, said the deliveryman was servicing the machines in front of the store, and he described the suspect as a black male, approximately 5 feet 6 inches tall, between 160 to 180 pounds, in his late 20s or early 30s with medium to dark skin.

“(The suspect) held the deliveryman at gunpoint and demanded money,” Scott said. “He then fled the scene on foot.”

Officers and K-9 units searched the areas behind the shopping center, near the LBW Community College nature trail and later the area around the Bellwood Subdivision.

Lt. Paul Dean with the APD said the suspect was armed with a handgun when he demanded the money.

“And it was less than $100 or so,” Dean said of the take. “(The deliveryman) was just starting his route where he took care of the machines outside the building.”

This is the second armed robbery in Andalusia in a little more than a month. On Dec. 30, two men attempted to rob two Hibbett’s Sports clerks; instead, they kidnapped a clerk at gunpoint and forced her into a car. The clerk was soon released behind the shopping center, unharmed. No money was stolen during the incident, and the two suspects have since been arrested.

“I don’t know what to tell people,” Dean said. “I don’t want to say there is a trend starting or to say that there’s not. There’s no way to know that.

“What we can say is be mindful of your surroundings,” he said. “Don’t put yourself in a situation where you’re an easy target. Avoid dark parking lots, and take notice of any suspicious-looking people around – and all that is not because we’ve had two incidents. It’s just being safe.”

Anyone with any information regarding the robbery is asked to contact the APD at 334-222-1155.