SHS girls to vie for win over Rams 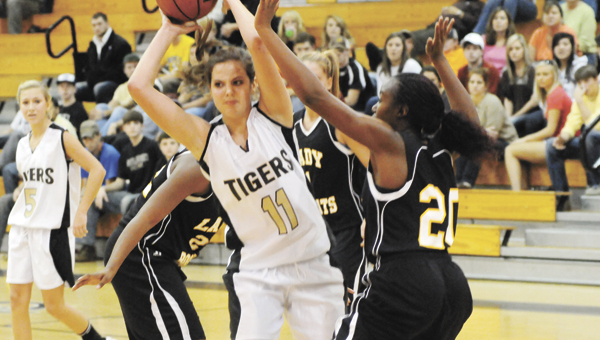 Getting past Brewbaker Tech in the Class 4A sub regional tonight would put Straughn junior guard Brittany Driver one step closer to her dream of playing in the Final 48 in Birmingham.

The Lady Tigers enter tonight’s contest with a 23-5 overall record, and will face a Lady Rams team, who beat St. James 42-37 on Saturday night.

Driver, a first-year player on the team, said if the team “works together,” then the outcome will go their way.

“That’s when we do it the best,” she said. “We’ve just got to keep our focus. If we don’t keep our focus, then we’ll play sloppy.”

SHS is coming off of a 59-35 loss to rival Andalusia in the Class 4A, Area 3 championship.

“That’s the strength of their team,” Kinsaul said.

Kinsaul said the Lady Rams like to penetrate the lane, and a big key for his team tonight is be able to not let them have second opportunities on the offensive end.

“We need to rebound, and be able to get into our offense,” he said. “We need to handle their man-to-man court pressure.”

Brewbaker Tech has suffered some set backs this season, losing key players last year to other schools and one to injury.

Leading up to tonight’s game, Driver said Kinsaul has been urging his girls to stay “focused.”

“When it’s off, we can’t play well,” Driver said. “We can’t just say we’re going to win this game. We have to look at each opponent and we have to come out with the same intensity against each opponent no matter how good they are or how bad they are.”

Before coming to SHS, Driver was home-schooled and played basketball for a team in the seventh grade.

She’s been playing the game she loves all of her life.

Getting a win tonight would be big for the team, she said.

“This will be big for all of us even though we’re young,” Driver said. “We’re looking forward to it.”

Tip off tonight is at 6 at Sidney Lanier High School in Montgomery.