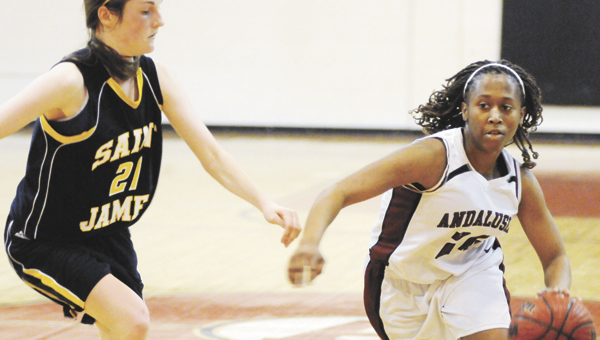 Andalusia’s quick start in the first period and dominant defensive performance in the second half made all the difference in the world as the Lady Bulldogs rolled to a 58-31 Class 4A sub regional victory over St. James on Thursday night.

The Lady Bulldogs outscored the Lady Trojans 16-2, going on a 14-0 run in the first period, which set the tone for the rest of the game.

With this win, the sixth-ranked Lady Bulldogs improve to 27-2 on the season and will play in the South Regional Tournament in Mobile next week. This is Andalusia’s fourth straight trip to the regional tournament, and 25th straight win of the season.

“It was good to get that one over with,” a relieved Lady Bulldogs coach Bennie Shellhouse said. “I’ve been worried about them (St. James) all week because they shoot the ball so well.”

On the defensive end, Andalusia’s Shi’Amber Townsend boxed out St. James’ Desiree Kirkwood and Savannah Smith to net 13 rebounds for the night. Townsend also had 17 points.

Alexis Horton, who led the Lady Bulldogs with 24 points, juked the whole St. James’ defense in the paint and went up for two to give AHS a 14-2 lead.

“That’s the first quarter that we’ve gotten off to a good start in several games,” Shellhouse said. “That was one of our goals was to get off to a quick start.”

Horton scored the first five points in the second half, and St. James then went on a 6-0 run to trail 21-8 with 2:06 left in the first half.

Hayden Barnes, who led St. James with nine points, got a 3-pointer to cut Andalusia’s lead to 22-11.

The Lady Bulldogs called for a time out with 1:02 left, Alectricia Barnes — who had seven points — got two free throws and Malcolm executed a sweet pass to Townsend for a score with time dwindling to close out the first half.

At the start of the third period, AHS led 28-13 on a pass from Horton to Alison Daniels, who nailed a jumper with more than seven to go.

After a few offensive possessions, Horton drove to the paint and got a 3-point play out of it to help the Lady Bulldogs to a 38-19 lead to put the game way out of reach for the Lady Trojans.

Horton’s 3-pointer, Barnes’ pass to Daniels for two points; and Horton’s 3-point play put the Lady Bulldogs ahead 46-23 with 1:27 remaining in the third period.

To end the third period, Malcolm — who had eight rebounds, four assists — found Townsend in the paint again for an easy bucket.

What really put the game away for Shellhouse was the team’s “defense and transition.”

“We picked it up a little bit on transition,” he said. We transitioned real well, and our fast breaks were going well, too.

“St. James had a good game plan for us, and we had problems in the second quarter scoring on them with that trap,” he said. “That’ll be definitely something we’re going to work on.”