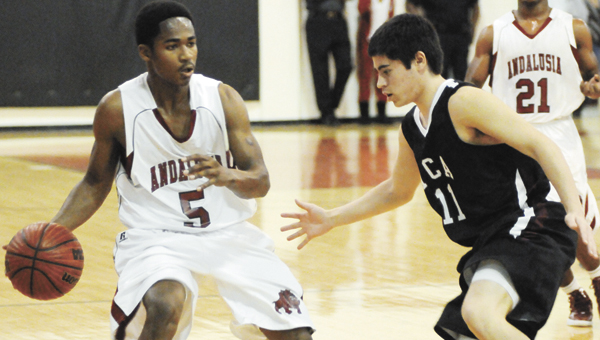 Andalusia blew a 17-point lead in the fourth period, but held on late to edge past Alabama Christian Academy 53-47 in the Class 4A South Sub Regional at AHS on Friday night.

“We had a great plan,” AHS coach Richard Robertson said. “Then, we’ll self-destruct.”

Robertson was referring to the fourth period, where the Eagles chipped away at Andalusia’s lead and cut the game to 49-42 with more than two minutes remaining.

The Bulldogs were throwing the ball away, causing turn overs that almost proved costly.

ACA’s Danny Madison, who was hot behind the arch all night, drove the ball in and cut the game to 51-47.

Andalusia’s Joe Flowers managed to drain a 1-and-1 with 6.8 left to help lift the Bulldogs to their sixth straight regional tournament.

With this victory, the Bulldogs improve to 19-13 overall, and will play Monroe County at 7:30 p.m. on Thursday in the semifinals of the Class 4A South Regional Tournament at the Mitchell Center at the University of South Alabama in Mobile. The Bulldogs beat Monroe County 49-40 on Nov. 30.

“We’re one of the 96 teams that are still left,” Robertson said. “Now, we’re going to a neutral court.

“They’ve (ACA) got a good basketball team, and I knew that. They’re well-coached.”

Jacard Townsend led Andalusia with 15 points and 13 rebounds for a double-double; Niguel Jones and Sam Byrd had 11 points each.

Madison led the Eagles with 18 points, Matt Self chipped in 12 points.

The Bulldogs built a 11-5 lead late in the first period off of a jumper by Jones, and took a 14-8 lead to the second period.

Things started to get hair for Andalusia in the second period, when ACA decided to go on a 10-4 run to tie the game up at 18-all at half time.

Missed free-throw chances by Flowers and Byrd early and turn overs again for both teams kept the game at 16-8 with 5:12 left in the first half.

The Eagles then went on a 6-0 run to cut the Bulldogs’ lead to 16-14 with less than three minutes remaining in the second period.

Townsend found Adams down low for the bucket, and ACA’s William Cullen got a jumper and bench-player Aaron Perry got a bucket on the other end with 1:07 left to put the game at 18-all.

With his team ahead 28-23, Townsend was caught holding on to Madison, and later got a technical foul. Madison made the front-end of the pair of free throws and the Eagles trailed 28-24.

Andalusia bounced back and led 31-24 off of a pass from Jones to Byrd on the inside.

Townsend later got a rebound, was fouled on the other end and made his free throws to put AHS ahead 33-24.

The Bulldogs led 39-24 after the end of the third period on a Townsend put back on transition.

Robertson admitted the team wasn’t on the “same page” in the game.

“”We weren’t on the same page we should’ve been,” he said. “It’s lose and go home. We don’t represent oursevles, we represent the whole Andalusia nation.

“It doesn’t matter what your record is now,” he said. “If you lose, you go home.”