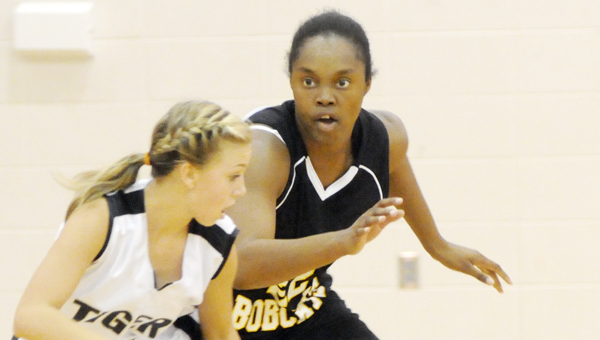 Opp's Nisha Stoudemire will try and help lead the Lady Bobcats to a semifinals win on Thursday in Mobile. | Andrew Garner/Star-News

When one thinks of Opp junior Nisha Stoudemire, one also must think about her mother, Guillermina Owens.

Through Owens’ urging, Stoudemire began her basketball career at a young age, playing for the city league team.

Now at OHS, Stoudemire will try and held lead her team to a semifinals victory over Montgomery Academy at the Class 3A South Regional Tournament on Thursday in the Mitchell Center on the University of South Alabama’s campus in Mobile.

Stoudemire said Owens has been a central figure in her career.

“Well, my mother had wanted to play basketball, but my great grandma (Jackie Stoudemire) was very strict whenever she couldn’t play,” Stoudemire said. “So, when I was in middle school, she (Nisha’s mother) always made me try extra hard and stay after practice.

On the court this season, Stoudemire gives the Lady Bobcats a good post presence, averaging 11.4 points per game.

She said the best part of her game is “posting up and getting the ball, and going in to score.”

OHS stands at 16-7 on the season after it claimed a 61-40 sub regional win over Daleville last week.

The Lady Bobcats will face a Montgomery Academy team that is similar in how it runs the ball on the court, Stoudemire said.

Stoudemire said getting a win on Thursday and Saturday would be big for not only the team, but the community.

“We want to make the whole city of Opp proud, and maybe win those two games down there and lead us to Birmingham,” she said. “We want to just do something that we haven’t done in a while.

“We (the team) are pretty pumped about it.”

Tip off on Thursday is at noon.