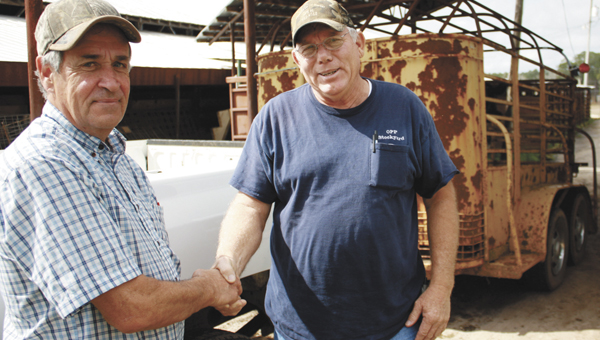 Bobby Jackson (right), manager of the Opp Stockyard, thanks Gus Owens of McKenzie for bringing his cows to the sale.

Word on the yard is it’s shaping up to be a record month for beef prices, and farmers visiting the Opp Stockyard Wednesday couldn’t have been happier with the news.

There was a steady flow of traffic as cattle farmers were dropping off loads for the day’s sale and quickly filling the pens.

J.D. Henderson, a veteran employee, said prices are the highest he’s seen in his 58 years with the stockyard.

Bobby Jackson, yard manager, said the weekly sale, which begins at 1 p.m., draws both buyers and sellers from all of South Alabama and Northwest Florida.

“And the prices are drawing folks in, as well,” Jackson said. “Prices are higher this week than last. Right now, a 200-pound calf is bringing on average $2.50 per pound, where comparatively three months ago it was around $1.60 or so.

The USDA report for last week’s sale in Opp showed replacement cows, which farmers use to replenish their herd, sold steady, while feeder cows – cows that are ready to finish prior to slaughter – were selling higher.

“Generally speaking, farmers buy a small calf to graze, meaning they’ll take it back to the farm, add 200-300 pounds on it, and then bring it back to the sale,” he said. “That’s how they make money.

“The bigger stock (like feeder cows) are bought to finish out, meaning, once they top 1,200 pounds or so, it’s off to the butcher and then the grocery store,” he said.

And all in all, it’s a good market for both the stockyard and the cattlemen, he said.

”When customers come in and pick up their check (for the cattle sold at the sale), they’re taken back a bit at the amount,” he said. “That’s a good feeling, for them and us.”

Jackson said on average, 400 to 425 head of cattle are run through the stockyard per week; however, individual weekly numbers tend to run slight in the winter and heavier in the summer months.

The increasing prices are welcome news for cattle farmers, a section of population that’s dwindling in Covington County, Jackson said.

“There’s been a decrease in the number of family cattle farmers – that’s a fact, whether we like it or not,” he said. “Children are living in a high tech, computer world, and when their poor daddy retires from farming, there’s no one there to step up to the plate and carry on the cattle operation.

“And that hurts,” he said. “Not just on a personal level, either, because what will happen when we lose the cattle farmers who carry the food load – meaning you go to IGA and pick up a pack of hamburger meat raised on a farm in the U.S. – I believe we’re going to see the same situation we’re facing with oil. You’ll see products shipped in from other countries, and it’s going to cost a pretty penny.”

In addition to the weekly cattle sale, the stockyard also holds a goat, chicken and horse sale on the third Saturday of each month, beginning at noon.