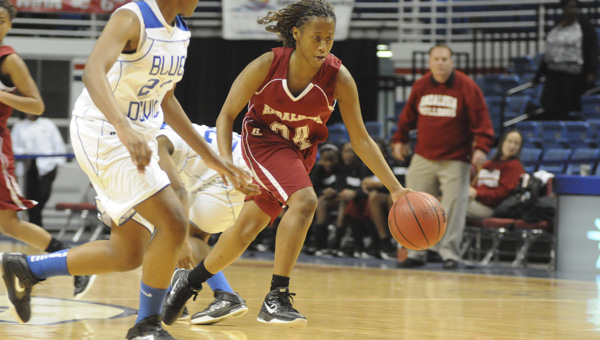 MOBILE — Andalusia’s girls basketball team were looking to start big against Escambia County on Thursday at the Class 4A South Regional Tournament.

Andalusia went on a 13-0 run in the first period and ran away in the second half, as the sixth-ranked Lady Bulldogs beat the Lady Devils 65-42 in the regional semifinals at the Mitchell Center on the University of South Alabama’s campus in Mobile.

With this victory, the Lady Bulldogs earned their 26th straight victory this season and will play UMS-Wright (26-6) in the finals tomorrow at 1:30 p.m. in a re-match from last year’s regional semifinal. AHS improves to 28-2 on the season.

“We’re looking forward to it,” AHS coach Bennie Shellhouse said about facing UMS-Wright. “They’re a well-coached team. Their coach does a great job with them. They do a lot of fundamental things I’m worried about. They’re a good, quality team.”

The Lady Bulldogs built their early lead in the first period, and outscored the Lady Devils 30-14 in the second half with the help of their seniors, Shellhouse said.

“They know what to do,” he said. “The second half was basically them doing what they do, or supposed to do. I didn’t have to say a whole lot to them.”

Horton said the team can’t express how excited they are to be playing in the finals tomorrow.

“Words can’t really explain it,” Horton said. “We just really want to go back out there and play hard.”

The Lady Bulldogs’ press and quickness in the first period surged AHS to a 23-9 lead going into the second period.

However, Escambia County would take advantage of Andalusia’s “over exhilarated” play to outscore the Lady Bulldogs 19-12 to cut the game to 35-28 at half time.

“We played the second quarter with the intensity of not to lose rather than to win,” Shellhouse said. “We were turning the ball over in easy situations that we shouldn’t have problems with.”

Andalusia had a 20-point lead with 3:34 left in the second period when Horton put up the ball on a putback after Malcolm got a block on the other end to make a 3-point play.

With 3:28 left in the first half, Escambia County’s Jasmine Irland got the bowl rolling to cut into Andalusia’s lead.

The Lady Devils would then go on a 13-0 run to complete the first half.

In the third period, the Lady Bulldogs surged ahead, letting the second period pass them by on the high way.

Andalusia went ahead 39-30 on a Malcolm putback and took a double-digit lead a little later on another putback by Townsend.

Alectricia Barnes added a drive in the paint and Andalusia led 46-32 with less than three minutes to go in the third period.

Andalusia put the game away for Escambia County with 2:33 on a steal and lay up by Horton.

Horton was guarded by Irland and said it was tough at first playing against her (Irland).

“It was pretty hard at first, but we stepped in and played better ‘D,'” she said. “We just played our game.”

AHS took a 55-35 lead into the fourth period, and never squandered, complimenting its defensive pressure with rebounds that turned into putbacks on the offensive end.

“We were able to step it up,” Shellhouse said. “We are just fortunate to get another opportunity to play.”

Alison Daniels added nine rebounds and four points for AHS in a good night; and Townsend had five steals in addition to her double-double.