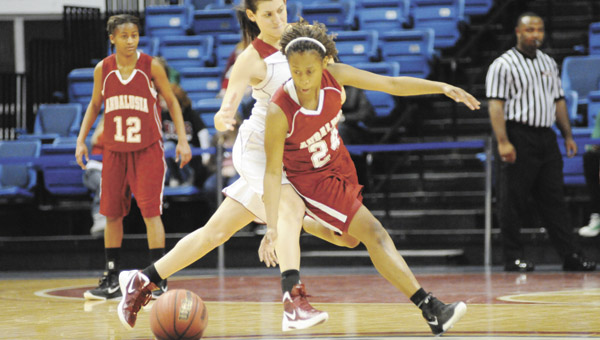 Andalusia’s Alexis Horton gets a steal in Saturday’s Class 4A girls South Regional championship against UMS-Wright at the Mitchell Center. Horton finished the day with 22 points and 10 steals. | Andrew Garner/Star-News

MOBILE — Andalusia’s Alexis Horton put her hands in the air and cherished the moment.

She, along with the rest of the Lady Bulldogs, are going back to Birmingham.

Horton led AHS with 22 points and 10 steals on Saturday as AHS downed UMS-Wright 41-35 in the Class 4A South Regional championship at the University of South Alabama’s Mitchell Center.

Andalusia will play in the Final 4 this week at the BJCC Arena for the second time in the last four years. The last time AHS was at the state tournament was during Horton’s freshman year in 2009.

The senior guard said that it’s great to get back to Birmingham.

“I’m actually excited,” Horton, who was the regional tournament’s MVP said. “We were trying our best to get back there.”

“Our goal all year was to get back there (to the state tournament) and be one of the top four teams,” AHS coach Bennie Shellhouse said. “Our goal is to win the thing and we want to go there with the mentality to win it.”

In Saturday’s game, Andalusia had the game won midway through the fourth period when Horton got one of her steals and was fouled on a lay up with 4:42 to go in the rematch of last year’s regional semifinals. UMS-Wright beat Andalusia, and then went on to fall to Brewbaker Tech, the defending Class 4A champion.

Andalusia led 35-33 after the missed free throw from Horton, and went on a 6-2 run for the championship.

“It opens up things for people to throw lob passes,” he said. “People have to throw it over, and Alison (Daniels) or Shi’Amber (Townsend) will end up getting the steal.”

That’s exactly what happened as AHS ran the clock out and got some key offensive plays down the stretch.

Townsend pushed her team’s lead to 39-33 with 56.1 seconds to go on a 3-point play off of an assist from Horton. She then made the free throw.

Throughout the game, the senior Townsend was trapped on the inside, and couldn’t get anything going on the offensive front.

But, with a little adjustment, Townsend finished the game with 11 points and helped her team with nine rebounds. Daniels chipped in with seven points.

“It feels so good,” Townsend said about going to the state tournament. “The first year, we didn’t really contribute because we were freshmen. We had a bunch of powerful seniors.

“Being that we got here and we did it on our own, it feels way better than when we went the first time,” she said.

Tyleshia Malcolm got a turn over late in the fourth to essentially end it for UMS with 7.6 seconds left. Malcolm finished with seven rebounds.

Horton then got a jumper and UMS-Wright’s Carrie Crook got a putback off of a missed free throw from teammate Ashley Scott to tie game back up at 33-33.

Then, Horton got the steal that took all sorts of momentum away from UMS-Wright.

“I was planning on sitting down and playing on defense, but when the ball’s in front of me, I have a bad habit of reaching,” Horton said. “I’m surprised they didn’t call any fouls.”

Andalusia led 31-24 after the third period as Horton picked up three of her steals.

“We were hoping she wouldn’t have any (steals), but we know the caliber player she is,” UMS-Wright coach Terry Canova said about Horton. “Our goal going in was don’t play with it in front of her. We felt like if she’s standing in front of you, give it to somebody else.

“I thought we did a pretty good job with it, other than just on a few occasions,” he said.

UMS came out shooting in the third period and took a 20-17 lead when Crook found Scott.

Daniels then found Townsend again to tie the game back up at 20-20.

AHS led 30-22 when Alectricia Barnes found Townsend down low for an easy bucket with less than 30 seconds left in the third period.

It was a low-scoring and defensive game in the first half as Andalusia edged UMS-Wright 6-4 after the first period, and led 17-13 at half time.

The first point of the game came when UMS-Wright’s Jordan Jeansonne hit the front-end of a pair of free throws with 4:17 in the first period.

Andalusia had a 6-2 lead with 41.4 seconds left in the first after Horton made a free throw, and then after that, she got her first steal of the game.