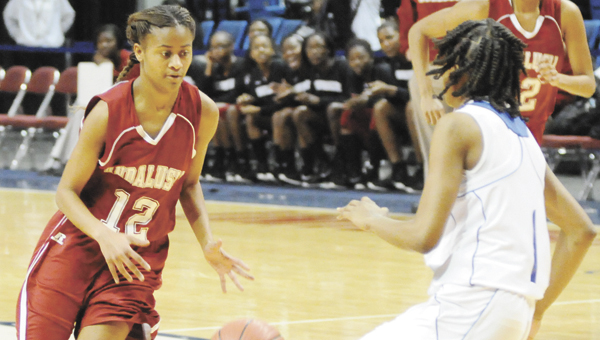 Martin Luther King had a dream for equal rights.

Andalusia’s girls basketball team also has a dream — to win the Class 4A state championship.

The sixth-ranked Lady Bulldogs will face top-ranked Good Hope tonight at 6 in the Final Four at the BJCC Arena, and the four seniors — Alexis Horton, Shi’Amber Townsend, Alectricia Barnes and Alison Daniels — said they are ready to play.

These four seniors have helped lead the Lady Bulldogs to a 27-game win streak this season, and more recently, a south regional title in Mobile on Saturday.

Andalusia beat UMS-Wright 41-35, a team that put it out of the post season last year.

But, what makes this group different than the past year’s seniors is that each “wants to win” more.

“We have to go hard or go home,” Townsend said, “or we won’t have another chance to do it.”

The last time Andalusia made it to the Final Four was during Horton’s ninth grade year, when she was a bench player.

Horton said the team’s approach against the Lady Raiders is simple.

“Our approach is to play our game speed,” Horton said. “And play great defense.”

Defense was the key in Saturday’s win over UMS-Wright, as Horton led her team in steals with 10, while contributing offensively with 22 points.

Since their Johnson Park days, each has played on a team together and it shows on the court.

“It will feel better because we’ve played with each other,” Townsend said about getting back to Birmingham. “When we went in ninth grade, it wasn’t our team. They had a bunch of power seniors coming back.”

Barnes added: “When you’ve played with each other since you were young, you know what each other’s skills are.”

Andalusia (29-2) will have to rely on its skills against Good Hope’s dominant trio of players in Kayla Tillman, Nina Mills and Kayla Elrod.

The seniors said they only know about the three offensive threats for the Lady Raiders, and as far as the rest goes, “we have faith in coach (Bennie) Shellhouse.”

Throughout the season, the seniors and the team have used the acronym “T.P.A.C.” as a motto.

“When we win the championship, we’ll tell everybody,” Barnes said.