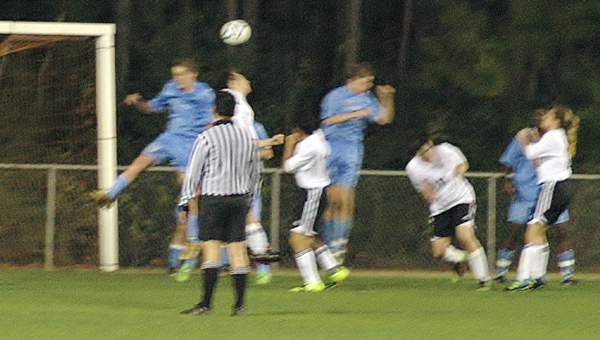 In its soccer debut, players on Andalusia’s soccer team left the field Tuesday night with nothing but smiles on their faces, coach Tim Ramsden said.

The Bulldogs fell to Houston Academy 6-0 in their first soccer match in the school’s history.

HA took a 4-0 lead in the first half, and Andalusia held the Raiders at bay in the second half until the last 10 minutes, where they scored their last two goals.

“In the second half, we came out and played a lot better,” Ramsden said. “It was a great learning experience for the team. They represented Andalusia very, very well.”

Ramsden said there were no fouls called in the game, where HA was simply “very physical,” “very big” and “very fast.”

“They were very clean in how they played,” he said. “They (the Bulldogs) represented themselves very sportsmanlike. Everybody got to play.”

Ramsden said there can be a lot learned from this first match.

“All of the kids came off the field with a big smile on their faces,” he said. “The parents seemed to be very enthusiastic about it.

“For our first time out, we’d like to have the score to be better, but it definitely was a positive experience for all,” he said.

Andalusia will visit Charles Henderson in Troy on March 9 in its next match.

The match is slated to start at 6 p.m.