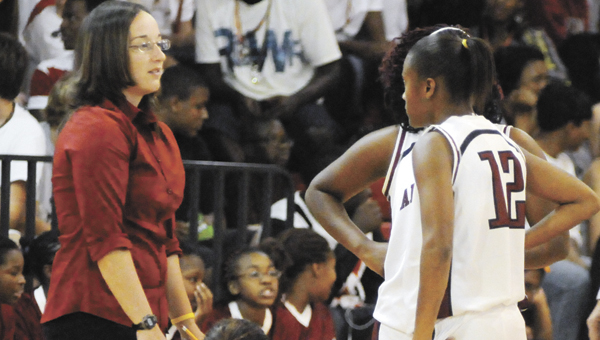 Andalusia assistant coach Teresa Herring (far left) talks with the Lady Bulldogs during a time out in the first game of the season. | Andrew Garner/Star-News

Has been AHS assistant coach since 2008

As a senior at Highland Home — in rural Crenshaw County — Teresa Herring and her teammates were on the cusp of greatness.

The Lady Squadron couldn’t play their basketball games at home that season because the gym had been torn down and was being rebuilt.

A remarkable season turned into a Final Four appearance at the BJCC Arena in Birmingham.

HHS lost in the first round of the 2001 state semifinals to Red Bay 61-47, and from there, Herring’s journey to becoming an assistant coach at Andalusia High School began.

She was recruited to play basketball at Shelton State Community college, where she also played softball, and in her third year, played on the soccer team.

A sports fan at heart, Herring came to AHS in 2008 only assisting with the basketball and softball teams. Later on, she became involved with the volleyball team and the next year (2009-10) became a fulltime assistant coach for the Bulldogs. She also is a science teacher at AHS. Additionally, Herring will take her first head-coaching job as the Lady Bulldogs softball coach this season.

“It’s hectic at times,” Herring said in a telephone interview on Thursday. “All sports over lap, but I love every minute of it.”

Herring was speaking by phone from Birmingham the day after Andalusia’s Lady Bulldogs beat top-ranked Good Hope 62-54 in the Class 4A state semifinals.

In her first year at AHS, the Lady Bulldogs made it to the state tournament and fell in the first round.

“It’s kind of like I’m repeating history almost,” she said.

Herring said she remembers the first-round loss as a senior at HHS vividly.

“It was somewhere where we’ve never been before,” she said. “It was huge for us. Everything was new for us that year.

“Playing in a huge arena in front of all of the fans — that’s actually where I got my basketball scholarship, and where I got recruited,” she said.

After her stint at SSCC, Herring transferred to Troy University, where she played soccer in her senior year.

The summer after graduation was when Herring said she met the current AHS senior Lady Bulldogs as eighth graders.

“I really got to watch these kids grow up,” she said. “I was here when they were freshmen and I met them that first day in the summer time when (AHS principal) Dr. (Daniel) Shakespeare and (AHS girls coach) Mr. (Bennie) Shellhouse brought them to camp at Troy.

“I met them that day, and been with them ever since,” she said. “They’ve grown so much. It’s great to see who they’ve become as people. They’ve really matured.”

“Coach Herring is really my calming factor,” Shellhouse said. “She keeps me calm sometimes. She has great knowledge of athletics all-around. I couldn’t have picked a better assistant coach to go through all of this with.”

But now, Herring will help assist the sixth-ranked Lady Bulldogs in the Class 4A state championship tomorrow morning at 9 when AHS will tip off against fifth-ranked Jacksonville at the BJCC Arena.

“It’s been an awesome experience,” Herring said. “God has really blessed me for a position I kind of landed in to.

“You’re teaching, you go to Birmingham and you go to regionals for two years and then your final year, (for the seniors) we’re playing for the state championship,” she said. “I couldn’t have asked for much more than that.”