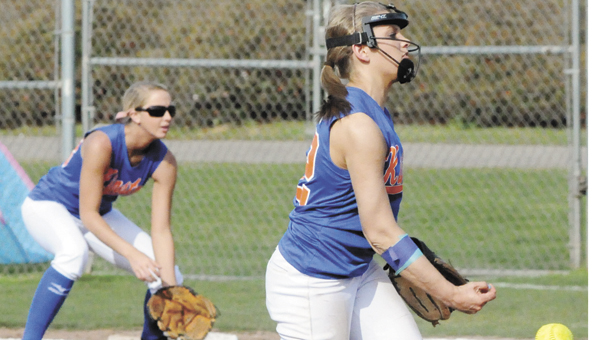 Kinston’s Macie Sanders had six strikeouts and allowed two runs on two hits to help lead the Lady Bulldogs to a 10-2 victory over Opp in the championship game of the City of Andalusia’s high school annual softball tournament on Saturday night.

From the start of its tournament, fifth-ranked KHS dominated the field. After trailing early against Class 1A foe and ninth-ranked Pleasant Home in its first game of the day, Kinston bounced back to beat the Lady Eagles 2-1, and then beat Eufaula 13-4 in the winner’s bracket semifinals.

During the PHS game, Kinston coach Janie Wiggins called a meeting at the mound for the infield because her team already allowed a run to cross the plate and PHS was in scoring position again.

In the meeting, Wiggins said she just reminded her team to stay focused.

“Their minds weren’t focused,” she said. “They weren’t intense like they needed to be. They just needed waking up.

“They respond well to whatever it is you ask them to do,” she said. “You can’t ask for anything more than that.”

In the championship game, Sanders’ two runs allowed came in the top of the third inning on a two-run home run from Opp’s Octavia Thompson. The Lady Bobcats had three home runs in the tournament.

“I thought when Octavia hit the home run, it might get us out of it,” OHS coach Jimmy Reeves said. “We were just on our heels. You could just tell.

“We had great pitching, great defense,” Reeves said. “That’s what we wanted to do.” 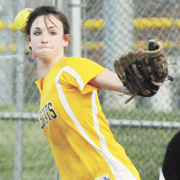 Opp’s Laiken Free throws to first base from third during her team’s win over Eufaula Saturday. | Andrew Garner/Star-News

In the championship game, Kinston added three more runs in the bottom of the third inning on an error, a passed ball and an RBI double.

Kinston scored two runs in the fourth on RBIs from Sanders and Emily Mock.

Sanders completed her 3-for-4 batting for the game in the fifth inning, when she hit a two-run double to score Breann Biddle and Madison Weeks.

KHS won the tournament with one player out with the flu, and also played without a player during Friday’s tournament start.

Wiggins said she was “proud” of how the girls battled on Saturday, and the whole tournament.

“I’m just proud of the girls for stepping up mentally and doing what they had to do doing it confidently,” Wiggins said. “They played well as a team.”

After the tournament, Kinston improved to 9-0 on the season, and Opp is 8-2.