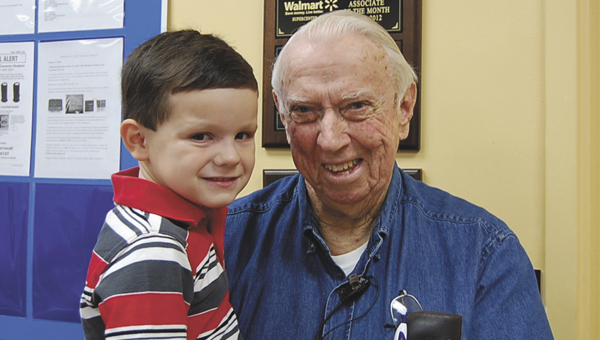 Joel Gomillion is proof that one person can make a difference in someone’s life.

Gomillion, a Walmart associate, was manning the front entrance a few weeks ago, greeting customers when he noticed a small boy and a frantic woman making their way through the sliding doors.

From the blue tint around the boy’s mouth, Gomillion said he knew something was wrong.

“Then, she started shouting, ‘He’s choking,’” he said. “By then he was starting to turn purple. She was thumping on the back, but it wasn’t working. He was a small thing, 4 years old.

“So, I turned him upside down, put his arms out and whopped him on the back a few times,” he said. “And out popped a lifesaver.”

Gomillion’s actions that day saved the life of Cason Boothe of Opp. Boothe and family friend, Faye Donaldson, came to Walmart expecting it to be just another average trip to the store. As they made their way across the parking lot, Donaldson handed the boy a piece of hard candy.

Gomillion said he responded without thinking.

“I just knew what to do,” he said. “I knew he was too young and tender for the Heimlich, and he wasn’t getting any air. I just did it. I did it without thinking.”

“Joel saved this child’s life,” Burns said. “In a day and age where people look out for No. 1, it is a privilege and honor to work with someone who looks out for others and is not afraid to take action if someone is in trouble.

“There are no words that can relay the gratitude that I have for Joel’s commitment to customer service and his quick response to this potentially catastrophic situation,” she said. “ His actions made the difference between life and death for Cason. These two will share a special bond, and every time he comes to the Andalusia Walmart, he will be on the lookout for his guardian angel, Joel.”

Gomillion said before the family left that day, he nearly wept.

“They asked if they could take a picture before they left, and I said sure,” he said. “When we were done, Cason reached up and gave me the biggest hug. That made it worth it all.”