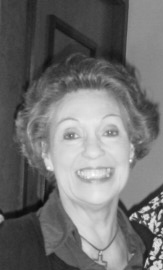 Those left to cherish her memory include her husband of 51 years, Dale Gunn; daughters,

Jane demonstrated Christian love and exemplified it in all aspects of her life. She served the Lord for 30 years as a warm and caring Christian professional at Bryce Hospital in Tuscaloosa, Ala. She was known for her radiant smile and gracious loving spirit. She spent her life caring for and helping others, which was her favorite thing to do.

She was formally a member of Christ Episcopal Church in Tuscaloosa where she was a Sunday school teacher for years before retiring to Andalusia.

She became a member of the First United Methodist Church in Andalusia, where she especially enjoyed the Brown Bag and Prayer Groups. She also enjoyed being with her

friends in The Pilot Club, The Garden Club, and InterSe Study Club of Andalusia.

“Nana was a true Southern lady. She was brave, bold, the epitome of unconditional love, and has been such a pillar of strength for everyone and anyone who has ever met her.”

In lieu of flowers, donations may be made to First United Methodist Church Building Fund