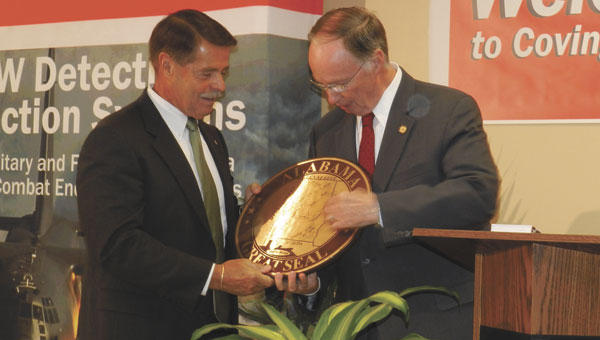 More than 200 people were on hand Tuesday morning for an announcement and celebration of DRS Technologies’ new operation at South Alabama Regional Airport.

The company’s focus is defense technology, and it develops, manufactures and supports a broad range of systems for the military and Homeland Security. At SARA, it will do aircraft maintenance and upgrades.

Ed Boyington, DRS vice president and general manager for aviation and logistics, said one of the keys for the company’s decision to locate here was location.

“There are plenty of empty hangars,” he said. “They’re just not in as good a physical location as this one.”

“Just as important,” he said, “is the environment you and your team across the board have set for business.

“This is used too often, but this really will be a world-class maintenance and modification facility,” Boyington said, adding that the company will focus on quality and customer care, just as it does in Elizabeth City, N.C., where it supports the U.S. Coast Guard.

“We are open for business,” he said.

The company already has new equipment in place, as well as a skeleton crew at the Andalusia facility. Employees will be added as the company secures contracts for work to be done locally. The company will move forward with measured growth, he said.

“We have reasonable expectations that we have good business potential in the pipeline,” he said.

Mike Blessinger, who will manage the local facility for DRS, said the company will hire junior technicians, experienced technicians and recent grads, based on the contracts it secures. He said he expects the Alabama Aviation Center, which has an instructional site on the airport campus, will be an asset for DRS.

The company’s American operations are headquartered in New Jersey, but are being moved to Virginia. It has facilities in 23 states, including Huntsville, Ala.