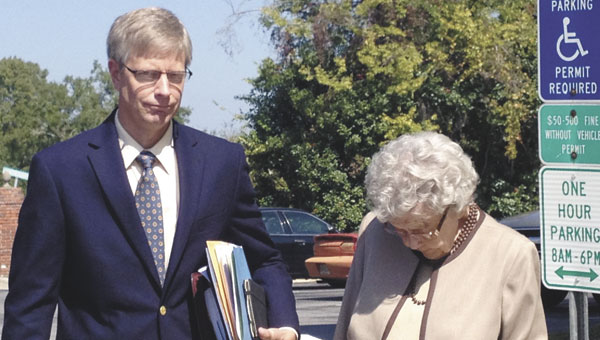 Guilty – that’s what River Falls Mayor Mary Hixon said Thursday as she plead guilty to stealing more than $200,000 from the town. Now, she must resign her position, pay back the money she stole and testify against any accomplices.

Hixon, 91, has served as the town’s mayor for more than 30 years. She was arrested Wednesday on theft and using her position for personal gain.

Covington County District Attorney’s office investigators began digging into town finances following a Star-News’ article in August that reported how Hixon sold the old town hall property, without council approval, to Richard Moss, a man who lived in her home for more than a decade.

Search warrants were served at town hall, Hixon’s home and her place of employment, HCH Development, on Aug. 28, as soon as the polls closed in municipal elections. Since then, investigators have discovered a multitude of financial crimes.

On Thursday, Hixon appeared before Judge Ashley McKathan and admitted to the wrongdoing. She was represented by Mark Christensen and pleaded to theft of property I, a class B felony, for stealing/misappropriating $201,611 in money belonging to River Falls. Initially, $148,196 was documented in missing town money, but prior to the start of the hearing, investigators were able to substantiate that additional funds were missing.

During the proceedings, Hixon answered McKathan’s questions in a clear and concise voice, and only deviated from “yes” and “no” answers when McKathan asked about her mental condition – “I’ve got my wits about me,” Hixon said.

She was sentenced to 10 years in prison; however, in consideration of “her advanced age,” was given five years probation. She was ordered to pay $200 per month in restitution and a lien placed on her home and any other real property. She was also ordered to pay $53 in restitution to the district attorney’s office, as well as other assorted court costs and fees. She must also provide the state with a DNA sample.

“Resign and give truthful testimony,” McKathan said to Hixon. “If you fail to do those things, your probation can be revoked.”

There is a question remaining about a $34,450 credit on the restitution balance – money, Hixon said, she loaned to the town.

McKathan said counsel should work out an agreement; however, if one could not be reached, a hearing would be held.

Had Hixon gone to trial and was found guilty, she could have face no less than two, but no more than 20 years, in prison and up to a $30,000 fine, McKathan said.

Hixon was ordered to report to the state probation office at the end of the day’s hearing. Other arrests are expected as Hixon, River Falls council members and more spent the afternoon testifying in a special grand jury session at the Covington County Courthouse.