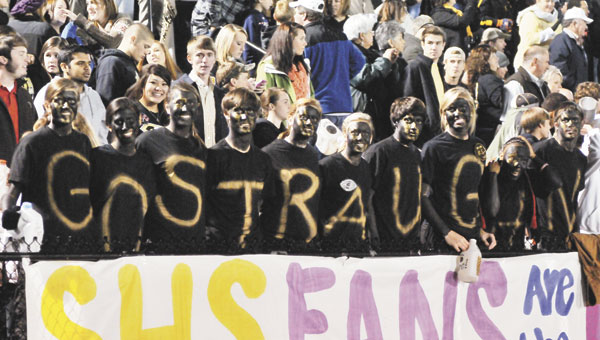 F or a select group of Straughn students, there’s nothing quite like yelling “Go Straughn!,” especially when there’s body paint involved.

SHS juniors JD Driver and Brennan Maddox came up with the idea of showing the football team their support by applying acrylic black paint with gold letters of “G-O-S-T-R-A-U-G-H-N” on 10 student volunteers. Each student is required to wear a T-shirt. Their arms and faces are painted.

Driver said the T.R. Miller game was the first time they were at the game in body paint.

“A couple of the football players were really hyped up (in the game),” Driver said. “They asked us to show our support more so we thought it was a good idea to paint up.”

The process of painting up for the football game begins two hours before kick off.

“For home games, we get in the weight room and paint up,” SHS junior Audrey Driver, who painted up for Daleville and Trinity, said. “Some of the cheerleaders will help us. They’ll just paint all of us. It’s kind of crazy.”

Audrey said the long part is waiting for the paint to dry.

“If we decorate our face, we have to wait for that paint to dry and apply another layer (if needed),” she said. “It’s real fun, but it feels awful standing out there for a couple hours.”

During the latter part of the football season, the weather tends to turn cold as winter approaches.

“People ask us, well you must be crazy cold when you’re cheering,” Maddox said. “I don’t think it’s that cold. We try to do something different each time.”

Audrey Driver agreed with Maddox, noting that she’s thought about putting on a jacket a time or two.

“I’ve felt (cold) the last couple weeks,” she said. “Once you’re out there jumping up and down and yelling the whole time, you kind of forget about it.”

JD Driver said that most of the “letters” played by students play sports at the school and that sometimes they’ll be different letters.

“Usually, it’s the basketball team,” he said. “We want to let them know that we’re here for them. We’re there to support them. Hopefully, they’ll show their support, too.”

Maddox said it’s really important to be out there for Straughn as it will compete Friday night for a berth to play in the Super 6 Championship game at Auburn.

“They tell us at the end of the game, ‘thank you for helping with school pride’ and all that kind of stuff,” Maddox said.

This week, the group will be wearing something a little different to the game, JD said.

After the game, the paint’s not that hard to wash off. It takes about 10 minutes, Maddox said.