In an effort to curb bullying, McKenzie High School on Monday hosted two celebrities who make it their mission to rally against bullying.

Country music performer Matt Kennon, who is know for his billboard hit “The Call,” and Troy McLain, a crowd favorite on the first season of the “The Apprentice” shared with students inspirational messages and the importance of anti-bullying mindsets. 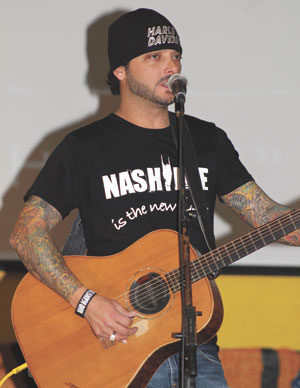 The program opened with McLain’s account of his school years, in which he was bullied for numerous reasons, ranging from being the poor kid whose family was evicted from nearly every home they had, to having a hearing impaired sister.

McLain shared how the bullying escalated to the point of him turning into a bully, and how his mother, despite the obstacles, always told him he was meant to do great things.

“I started to believe I was going to do great things,” he said.

McLain said one day a bully told him that the reason they moved from home to home was because his mother was being evicted because she couldn’t pay the rent.

When, he confronted his mother, she told him that in life you do two things.

His mother told him if he believed the titles that bullies put on him, he wouldn’t go anywhere.

McLain said he was bullied so much that he became a bully.

“I wanted to take power,” he said. “One afternoon, while walking my sister home, some kids were taunting me and my sister, I jacked him so hard that I shattered my wrist. I broke the kid’s eye, shattered part of his skull, and more,” he said. “It was my kid sis, who he had called deaf and dumb, that stopped it. She told me I was killing my self.”

Eventually, McLain started a business, which started growing, and he applied for “The Apprentice,” in its first season.

“When it got down to 50, we had to fill out all of our education, places lived, etc.,” he said. “There were 28 million people watching. I made it to the finals. It was Kwame Jackson and me. Donald Trump had to decide between a kid with a high school diploma or a guy with a Harvard degree. I told Mr. Trump I had a PhD. I was poor, hungry and driven. He still fired me.”

McLain said that he began to receive phone calls from celebrities and influential businesspeople soliciting his services as a marketing and communication person.

McLain challenged the students to take 10 seconds rather than bully others.

Kennon performed a concert for the students, including a song, “You Had to Pick on Me,” which boasts powerful lyrics.

“He hid behind his lunchbox every day at the bus-stop where some big ole boys got their kicks kickin’ him ‘round,” the song starts. “She heard them laughin’ ‘bout the way she looked in the hallway at the high school. She hid behind her books. Every day in that lunchroom, she wouldn’t eat a thing.”

The program was made possible through the sponsorship of Nick and Terry Saban through their foundation, Nick’s Kids fund.

The program was also presented at other Butler County Schools.

“Research indicates that half of all kids experience bullying at some point during their school years, and a significant number are bullied repeatedly,” Butler County Schools superintendent Dr. Darren Douhitt said. “Bullying and cyber-bullying peaks in middle school and continues as a serious threat in high school. Bullied children – and the bullies themselves – are far more likely to drop out of school.”