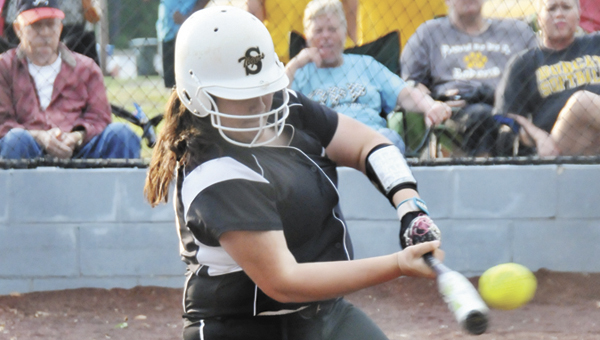 When one is in a tough situation, sometimes a joke is in order.

Straughn was facing a bases-loaded situation with one out in the bottom of the fifth inning.

Lady Tigers coach Trent Taylor called time, held a team meeting in the pitcher’s circle and told the girls a joke to lighten the mood.

SHS winning pitcher Hayden Willis then struck out Opp’s No. 3 hitter and the defense completed a ground out from second to end the inning, and the Lady Tigers went on to beat the Lady Bobcats 4-2 in area action Tuesday night.

“I felt like in that situation, there wasn’t any great motivation,” Taylor said about the meeting. “I just went out there and told them a joke, and tried to lighten the situation.”

The Lady Bobcats cut into Straughn’s 4-1 lead earlier in the fifth inning when courtesy runner Ashley Peacock scored on an error.

Opp loaded the bases after Hope Ladson reached on a fielder’s choice, Savannah Gerber reaching on the error that scored Peacock, and Kelley Pierce reaching on a bunt single.

“I can’t say enough about the job Hayden did out there,” Taylor said. “Especially with one of those situations with bases loaded and the heart of their order up. You get a huge strikeout and then ground ball to end the inning.”

OHS threatened again in the bottom of the sixth with two on and one out. However, a strikeout and a ground out ended the inning for the home team.

OHS coach Jimmy Reeves said simply that his girls couldn’t get it done in the fifth.

“I had my three and four hitter up, and they’re going to come through most of the time,” Reeves said. “We just didn’t get it done that time. Again, it goes to (Straughn). They just played a great game. The girls have improved a lot.”

Straughn now sits at 4-1 in Class 3A, Area 2, and will need to beat Opp next Tuesday to host the area tournament. The eighth-ranked Lady Bobcats fall to 18-6 overall, and 3-2 in area.

Straughn jumped out to a 3-0 lead in the first inning on an RBI double from Kristen “KP” Peavey that scored Laken Harris; and a two-run single from Payton Mitchell that scored Paige Taylor and Peavey.

In the second inning, the Lady Bobcats scored one run when Tori Reisnour scored on a single from Opp’s Anna Harrelson.

Willis, who got the win for SHS on the mound, struck out three and allowed two runs on six hits in a complete game performance.

Harrelson pitched six innings and agave up four earned runs on five hits while walking two to get the loss.

Molly Stewart hit a double to left to score Harris to give SHS a 4-1 advantage.

“Opp’s got an outstanding ball club,” Taylor said. “The biggest thing is the three-run inning and getting that other one late, and then the bases-loaded situation with one out and getting out of that. That was huge.”

Reeves gave all the credit to Straughn Tuesday night.

Reeves said there’s no doubt his girls will bounce back.

“We’ll fight through it,” he said. “We’ll come out and start playing again. We’ve just got to stay together and keep working, that’s the only thing I know to do.”

Mitchell went 1-for-3 with two RBIs to lead Straughn. Stewart and Peavey had on hit and an RBI each.

Straughn and Opp will be back in action Thursday night in Pleasant Home’s annual softball tournament.

Eyes on the prize