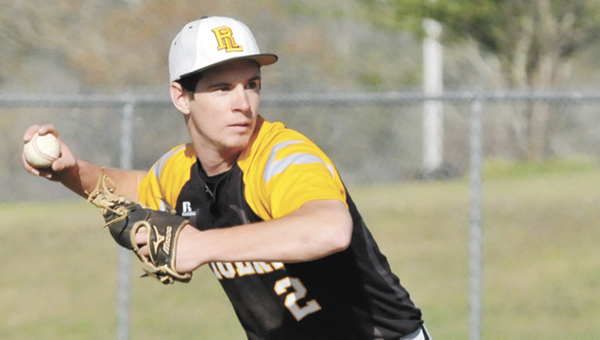 Red Level’s Jordan Walker and the Tigers will travel to play Brantley in the first round of the Class 1A state playoffs Friday. Florala hosts Geneva County as the Wildcats look to capitalize on their success this year. | Andrew Garner/Star-News

The Tigers are getting ready to play Brantley in the first round of the Class 1A state playoffs, which begin on Friday at BHS (15-12) in a best-of-three series. Two games will be played tomorrow at 4 and 6:30 p.m. An if necessary game will be played at 1 p.m. on Saturday in case of a split.

Unlike RLS, Ninth-ranked Florala won’t have to travel far in the first round as the Wildcats will play host to Geneva County tomorrow night at 4 and 6. Game time on Saturday is at 1 p.m. if necessary.

“First off, we’re excited to be in the playoffs,” Ingram said. “That’s one of our goals every year. It’s a fresh start. Everybody’s record is out the window at this point.”

FHS coach Bubba Nall said it’s going to be a good game for his team.

“Geneva County is a very good baseball team,” Nall said. “They’ve been a top 10 team all year long. They have good pitching and are solid on defense. They’re well coached.

The last time RLS (6-15) advanced to the playoffs was in 2011, where the Tigers fell to Flomaton in the first round.

Florala hosted the first round in 2006, according to locals’ accounts, Nall said.

“It’s been a long time coming,” the Wildcats’ coach said.

Ingram said the preparation for tomorrow’s playoffs start has been good.

“It was a real good practice,” he said about Monday. “The kids are focused and excited. A lot of people are packing it up right now.”

In order to beat the first-round jinx and get the opportunity to host the second round, Ingram said it’s going to take a lot of what the kids have been doing this season.

“We’ve got to make all of the routine plays,” the RLS coach said. “We’re not a power-hitting team.

“We’re going to have to do some small ball, and we’ve worked on that a lot.

“The thing I asked our boys is, is it good enough to be in the playoffs, or do you want to advance,” he said. “We want to get it back to Red Level.”

Florala enters tomorrow’s contests with a 15-4 record. The Wildcats will have to play well on both sides to be successful, Nall said.

“I think we’re going to have to have solid pitching,” he said. “The biggest thing when we’re hitting is that we’ve got to put the ball in play. If we do that, then we’ll give ourselves a chance to win.

“I think we’ve got 14 kids who will give us the best chance to do that,” he said.

Nall said not only are the players “excited,” but there is also a buzz around the school and community.

“Heck yeah, they’re excited,” he said. “The coaches are excited. There’s a lot of talk about this around town.”

Bad weather is slated to pass through the area tomorrow; however, if the weather affects the first-round playoff games at FHS, then they will be moved to Saturday at 1 and 3 p.m., respectively. The third game will be played on Monday at 4 if necessary.