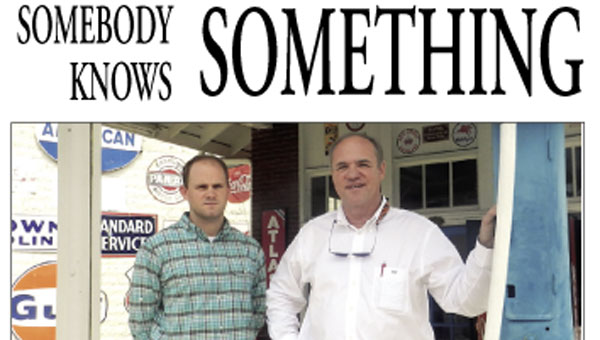 Shelby and Charles Smith at Ed Smith’s Fillin’ Station in Florala. Charles Smith’s father, Ed Smith, was murdered there in 1978.

Charles Smith is 99.9 percent certain that the man who murdered his father in 1978 is serving a life without parole sentence in Holman Prison.

But it is that lingering shadow of a doubt – a doubt that caused a Covington County jury to acquit David “Bubba” Bonner Jr. of murder charges – that nags at Smith.

Ed Smith’s murder is just one of the officially unsolved murders in Covington County. Since the Covington County District Attorney’s Office announced a 15-member cold case task force was conducting an active investigation earlier this month, The Star-News is giving exposure to some of those unsolved cases.

Late in the day on Jan. 3, 1978, Ed Smith was shot twice with the apparent motive of robbery inside his service station in Florala. His pockets were turned inside out, and his money clip, which normally held small bills that perhaps looked like a large sum of money, was missing.

“Somebody knew he had some money,” Charles Smith said this week of the cash that was missing in 1978. This he believes because his father also had cash in his shirt pocket that wasn’t taken.

“I had borrowed some money from him to buy a car in Mobile,” the younger Smith, who was then 24, recalled. “On Christmas, I had paid him back in $100 bills. That money was in his shirt pocket.”

When it was dark, and Ed Smith was expected at home, his wife, Ada, who often worked with him, called to check on him. When he didn’t answer, she drove back to the downtown station. The door was, unusually, locked. So she went back to her vehicle, got the keys, and found her husband’s body on the floor.

Charles Smith was told that his mother went toward the street and flagged people to help her. Soon, there were people everywhere, and the scene wasn’t secured for an investigation.

Still, a couple of days later, Ada Smith, Charles Smith, Eddie Searcy and Regina Smith were assured that the man who had killed their husband and father was in custody.

“(Then Florala police chief) Paul Mitchell came to our house on Fifth Avenue and told us they had made an arrest,” Smith recalled. “(Officer) A.V. Patrick said, ‘It was my stepson and we’ll put him away.’

The two officers assured the Smith family there would be no favoritism shown toward David Bonner Jr., Patrick’s stepson.

“They said it was an open and shut case,” Smith recalled.

But some strange things happened on the way to court.

Carnell James worked, in 1978, at Comer Zorn’s station across the street from Ed Smith’s. When he was first questioned, he gave police a statement that he had seen a white man leaving Smith’s filling station on the afternoon Smith was killed.

After Bonner was arrested, he told police he had in fact seen Bonner leave, but that he was afraid of Bonner, who already was facing charges of assault with intent to murder.

“When Carnell James gave his second statement, the first statement was wadded up and thrown in the trash,” Charles Smith said. “The defense miraculously got that statement.”

And, four months later, when the case was tried, Patrick gave his stepson an alibi, testifying that Bonner was with him at Walmart in Crestview at the time the murder occurred.

According to Star-News archives, the jury deliberated for five hours before finding Bonner not guilty. But Bonner didn’t become a free man that day. He was held on the previous charges, from December of 1976, of assault with intent to commit murder. In that case, Bonner had ambushed someone known to him. He turned himself in and confessed to the police chief, Mitchell. In May of 1978, a jury found him guilty and then-Circuit Judge Ab Powell sentenced him to 20 years in prison, the maximum penalty in the case. The Court of Criminal Appeals upheld the conviction.

Bonner served approximately seven years of that sentence. He was working in Montgomery when he was charged with the death of a co-worker, whom he killed with a shotgun. Charles Smith said that even though Bonner had been acquitted in his father’s death, victims’ advocates workers in Montgomery kept his family informed about Bonner’s activities.

Today, Bonner is in Holman Prison near Atmore where he is serving a sentence of life without parole.

Through the years, many people in and around Florala have told Charles Smith and other members of his family pieces of a story – or perhaps their own theories – of what really happened. Smith believes Bonner killed his father, and that he had an accomplice. But he’d like to know for sure.

The two police officers – Mitchell and Patrick – are both dead. The man rumored to have been an accomplice is dead. Bonner’s mother is dead. His brother, Jerome Patrick, also is incarcerated in the Alabama Prison System.

Smith believes Bonner could fill in the blanks, but also believes there’s a good chance that someone else knows the real story.

Not much is known about Colin Douglas Millick other than he was bearen to death in Florala in 2003. No... read more