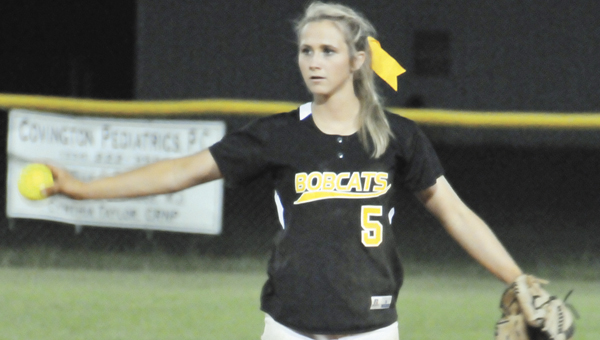 The Lady Bobcats got off to a good start in game one of pool play with a 10-0 win over the Lady Wildcats in four innings, and then topped the Lady Tigers 9-2 in the last game of the night.

OHS enters tomorrow’s single elimination bracket play as the No. 1 seed from Pool A.

“We played a lot better,” OHS coach Jimmy Reeves said. “We played well both games. We hit the ball. We had a zero the first game. That’s what we’re after each game, trying to shut somebody out each game.”

Courtney Chatham allowed two runs on one hit to earn the win in the second game over Straughn.

Chatham, who had two RBI doubles, pushed the Lady Bobcats ahead 3-1 in the top of the fourth on her first double.

OHS followed that inning with a four-run fifth on four hits that came from Chatham, Anna Harrelson, Paige Johnson and Savannah Gerber.

“We really didn’t really start hitting the game until late in that game right there,” Reeves said.

Straughn got on board in the bottom of the first with an RBI double from Payton Mitchell.

The Lady Tigers tacked on their second run in the fifth inning on a flyout.

In game one for SHS, the Lady Tigers trailed 2-1 to Florala until the top of the fifth when catcher Katelyn Kinsaul hit an RBI single to tie the game at 2-all.

Mitchell hit a fly ball to left and on an error Straughn’s Paige Taylor scored the game-winning run.

SHS coach Trent Taylor said attacking the ball is a must in games like these.

“We really didn’t, in either game, attack the ball like I’d like to see us do,” Taylor said. “We were a little lithargic at the plate. In both games, we made some plays, and we had some that let get by us.

“Opp hits the ball, we know that. We got to get a little better,” he said.

Brentley Armstrong threw a four-hitter in Straughn’s win over Florala.

If the weather holds up and Pool B gets to fit in its games today, then Opp will play at 2 p.m. on Saturday to start single-elimination bracket play. Straughn plays at 11 a.m., and Florala at 9:30 a.m.

The Star-News will update its readers on any changes, as far as, Saturday’s play of the tournament is concerned.