Andalusia falls in 1st round 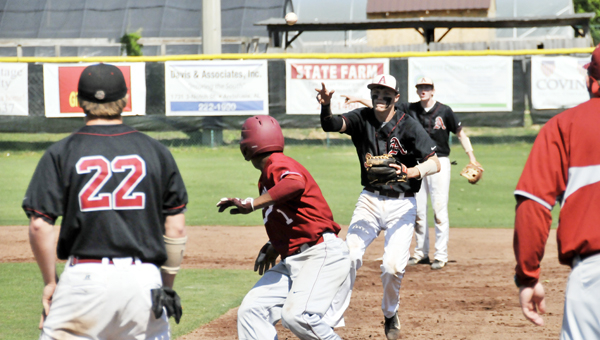 Andalusia’s Jud Rogers (right) throws the ball to first on a run-down attempt that eventually led to a run scoring from third base during game two today. | Andrew Garner/Star-News

Andalusia fell 7-0, 10-2 to UMS-Wright today in the first round of the Class 4A state playoffs.

The home Bulldogs ended a season, where they set a new record with the most wins at 28 in program history.

Andalusia played hard in both games, but left too many runners on in scoring position, head coach Jonathan Rasberry said.

“We’re not a team that can leave runners on in scoring position, whether it’s two outs or with nobody out,” the Andalusia coach said. “It was a good season. In the grand scheme of things, it doesn’t mean anything until you get out of the first round. That’s my opinion. I appreciate these kids. Throughout the year, they did a good job.”

Andalusia took its only lead of the series in the top of the first inning on an RBI single by Brandon Smith that scored Grayson Campbell.

UMS answered back in the bottom half of the inning with a two-run homer by Troy Dixon to take the lead.

With runners on second and third, AHS couldn’t get anything across with one out.

That was a big inning for his team, UMS-Wright head baseball coach Brett Boutwell said.

“I’d like to let Hayden Williams know that he might not have had his best stuff today, but he gutted it out in that second inning when they had runners at second and third and got everybody out,” the UMS coach said. “That was big for us, I think, in the second game.”

The visiting Bulldogs tacked on three runs in the bottom of the third to take a comfortable 5-1 lead. Courtesy runner William Baynes and Dixon scored on errors to get the inning started for UMS. Chauncey Callier later came home on Brett Patterson’s single.

Andalusia made it 5-2 in the top of the fourth when Campbell got an RBI ground out to score Ross Graham.

UMS scored one run each in the fourth and fifth innings, and added its final three runs in the sixth on a walk, a single and passed ball.

“They won every inning, and we didn’t have a big hit at all to take the lead or do anything special,” Rasberry said. “Every inning matters and every out matters in baseball. We ddin’t have that mentality today and that’s why we’re done.”

Smith, Quinton Maddox and Daniel Henderson had two hits each for AHS.

Williams allowed one run on six hits and walked three and struck out one in three innings to earn the win.

Tanner Allen hit a two-run double in the second inning; Gunner Roach and Callier had an RBI each in the third; and Dixon had an RBI single in the sixth to lead UMS-Wright in the win.

Graham allowed seven earned runs on 12 hits in six innings for the loss. He struck out one.

Patterson allowed no runs on six hits in a complete game to get the win for UMS.

With the series win, UMS-Wright (24-9) advances to the second round, where it will face Thomasville next week. THS beat UMS 2-1 in regular season area play. However, the Mobile Bulldogs enter the series after getting their 16th playoff series win out of 18.

“We’ve still got a lot things to work on from the last time we played them,” Boutwell said. “I know that going into it, it’s going to be a good series with two quality programs that look forward to these situations, whether it’s football or baseball.”

Rasberry said he appreciated all the help this season.

“I appreciate the support of the parents of these kids, coming out here with long hours and traveling,” he said. “I just want to thank the kids for the effort they’ve given throughout the year. It’s been one of the best baseball seasons we’ve had here. We’ve just got to get our mind set right in the post season.”

Andalusia’s Hiren Patel (3) advances down the field during the first half Friday night. The Bulldogs fell 3-1 to Charles... read more