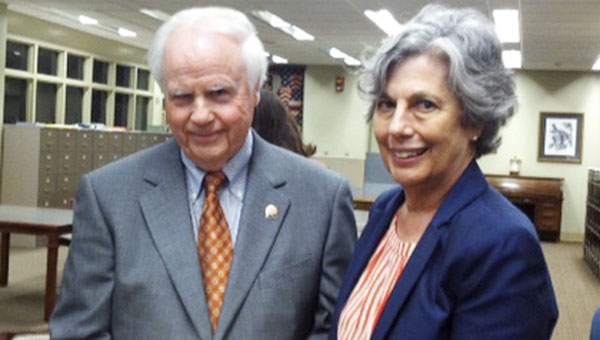 Dr. Dwayne Cox, head of special collections and archives, said he has learned much about the Civil War era through Vick’s collection.

“I didn’t know there were Confederate Marines,” Cox said. “And John taught me that the Confederate postal service actually made money.”

The collection, he said, “reflects John’s passion for history.”

“I always say there isn’t anybody who doesn’t have a passion for history,” Cox said. “The difference is the window they look through. One person may choose his own family, another may look through postal history.”

Included in the gift is a unique collection of Confederate Marine Corps letters from Lt. Edward Crenshaw of Butler County.

Other items that were donated are correspondences written to Robert E. Lee while he was president of Washington College in Lexington, Va., mostly from colleagues, students or former students, dating from 1868 to 1870. Also of interest are pieces of correspondence between Jefferson Davis and the Secretary of War of the Confederate States of America. One of the letters contains Davis’ signature. There is also the oath of loyalty to the Union that Raphael Semmes, captain of the raider C.S.S. Alabama, wrote and signed when he was being hired as a tax collector for the city of Mobile after the Civil War.

Vick said there wasn’t a piece that was his favorite in the vast collection of letters, postal memorabilia and books. But he was most interested, he said, in Semmes, the Mobilian who was both a Confederate admiral and a brigadier general.

He had collected the items for at least 30 years, he said.

“Faye encouraged me to find a home for this material,” he quipped. “The truth of the matter was, she was afraid I’d kick the bucket and she’d have something to worry with.”

Faye Vick said that after the materials were moved to Auburn, she took the bookshelves out “before he could start again.”

John Vick, who went to Auburn as part of the Naval ROTC program and graduated in 1962, said he dedicated Friday’s events to two classmates who died during the Vietnam War.

Hesper Montford, an AU graduate student in archival studies, archived the collection. She said it was a great experience.

“There aren’t a lot of people who’ve had an opportunity to work on a collection of this size,” she said.

Call it innovative recycling, while helping a good cause. Local Methodist men have banned together to raise funs to replace... read more