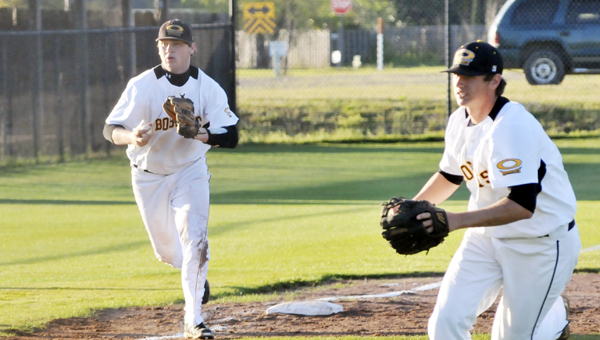 Opp’s Dakota King (left) and Ethan Davis start a run down in an earlier contest. The Bobcats beat Bayside Academy 2-0, 12-0 today in the first round of the Class 3A state playoffs. | Andrew Garner/Star-News

Revenge is sweet and Opp is advancing.

The ninth-ranked Bobcats defeated Bayside Academy 2-0 and 12-0 in the first round of the Class 3A state playoffs today.

“We played really well on defense,” OHS head baseball coach Michael Cassady said. “Our pitchers did a great job and gave us a great chance to win.”

In a rematch from last year’s second round, Opp took leads when it did and never gave them up.

Opp’s Dakota King allowed four hits and struck out five in seven innings in game one.

In the sixth inning of game one, Jo Jo Jones hit a two-run single to break the scoreless tie.

Opp scored three runs in the sixth inning of game two, and had eight back-to-back hits in a nine-run seventh inning.

Brady Vidich, Jacob Johnson and Colt Harrell had three hits each for the Bobcats.

“We were fortunate to get the win in both of the games,” Cassady said. “I’m proud of my coaches and kids for battling.”

With these wins, Opp (22-7) advances to face top-ranked W.S. Neal in the second round at home on Friday and Saturday.

Andalusia falls in 1st round

Andalusia’s Jud Rogers (right) throws the ball to first on a run-down attempt that eventually led to a run scoring... read more