Spice things up with some Indian food 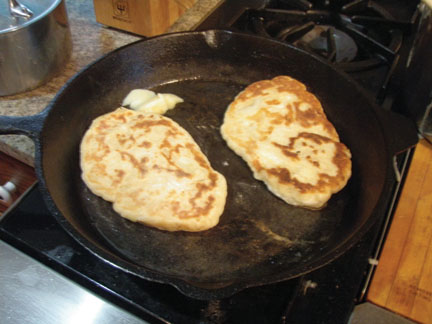 It looks like cornbread, we know – but truly, it’s a delectable Indian delight.

I come back to Indian cooking quite often. I wonder if anyone out there tries any of the Indian recipes. Chicken tikka masala is probably one of the most popular dishes at all Indian restaurants and rightly so, since the chicken is in a creamy tomato sauce with wonderful heady spices. It is a comforting dish and can easily be done at home.

I usually do naan when I do an Indian meal. I have also tried a new (to me) Indian bread, an onion naan instead of the regular naan. I also cooked this naan in a cast iron skillet. Now anyone can do this bread, and it was delicious. This wonderful chewy bread will impress your guests, and they can use it to scoop out the last of the masala sauce.

The yogurt helps tenderize the chicken; the garlic, ginger, and spices in the marinade infuse it with lots of flavor.

Add tomatoes with juices, crushing them with your hands as you add them. Bring to a boil, reduce heat and simmer, stirring often and scraping up browned bits from bottom of pot, until sauce thickens, eight to 10 minutes.

Meanwhile, preheat broiler. Line a rimmed baking sheet with foil and set a wire rack inside sheet. Arrange chicken on rack in a single layer. Broil until chicken starts to blacken in spots (it will be cooked through), about 10 minutes.

Heat milk in a small saucepan over medium-low heat until an instant-read thermometer registers 100 degrees.

Transfer to a small bowl and whisk in yeast and sugar. Let stand until foamy, about 10 minutes.

Transfer dough to a lightly floured work surface. Knead until a smooth dough forms, adding flour as needed (dough will be sticky), about five minutes. Lightly grease another large bowl with ghee or oil, place dough in bowl, and turn to coat. Cover with plastic wrap. Let rise in a warm, draft-free area until doubled in size, about one hour.

Punch down dough and divide into 10 pieces. Using floured hands, roll each piece into a ball on a lightly floured surface. Cover with plastic wrap; let rest 10 minutes.

Heat a large cast-iron or other heavy skillet over medium-high heat. Lightly coat with ghee or oil. Working with one piece at a time, stretch dough with your hands or roll out with a rolling pin to 1/8” thickness. Sprinkle with salt. Cook until lightly blistered, puffed, and cooked through, about two minutes per side. Wrap in foil to keep warm until ready to serve.

Do Ahead: Naan dough can be made four hours before shaping. Cover and chill.

Band strikes it up at Universal