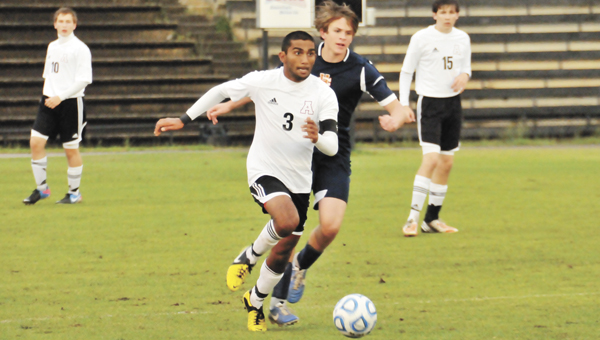 Andalusia’s Hiren Patel (3) advances down the field during the first half Friday night. The Bulldogs fell 3-1 to Charles Henderson in their final area match of the season. | Andrew Garner/Star-News

The Bulldogs and Trojans matched for their final area contest of the season on a wet and cold senior night.

AHS fell behind early in the first half, but came back to even the game at 1-1 midway through to go into halftime with a tie.

CHHS scored early in the second half and Labrant scored his second goal to put the game away for Andalusia.

With this loss, AHS falls to 12-2 overall, and 5-1 in Class 1A-4A, Area 2. The Bulldogs have one more regular season contest against Northview of Dothan on Thursday before hosting the first round of the sub-state playoffs against second-ranked Bayside Academy on Saturday at 6 p.m.

AHS coach Tim Ramsden said hopefully the Bulldogs will put this loss behind them and get focused for next week.

“Obviously, I’m very disappointed,” Ramsden said. “I think we can play a lot better than what we did (Friday night).

“From goalie all the way through to the strikers, nobody played like they can play,” he said. “We let them dominate us by us not going to the ball. We just did not play our game at all — at any point did we play our game.”

Labrant’s first goal came on a high shot from the 30-yard line within the first minutes of the match. His shot sailed over AHS goalie Chris Smith’s head and into the net.

“The defense looked very, very weak tonight,” Ramsden said. “The first goal was a nice shot, but I mean we should’ve never let him hit it. Chris shouldn’t have been off of his line (advancing forward in the box) like that. That wasn’t great.”

Andalusia senior Hiren Patel scored the Bulldogs’ only goal of the night off of a corner kick by his brother and fellow senior, Hiten Patel, midway through the first half.

Charles Henderson got off to another great start after halftime, where Will Young scored to give the Trojans a 2-1 advantage within the first eight minutes of play.

Labrant’s dagger came at the 59th minute of the game to put things out of reach.

“The second goal, we just let him walk straight through us, which was very disappointing,” he said. “The last goal, again, nothing special, just some mistakes. There were a lot of mistakes tonight. Hopefully, they’ll get it out of their system and come out and play well next week.”

While trailing by a large deficit, Andalusia had its opportunities to get the ball in the net, but didn’t follow through.

Hiten busted his tail up the middle from the 40-yard line and was alone in the box, but Trojans’ goalie Scott McLendon came out and made a great save to keep his team ahead by a wide margin.

Ramsden said the team practiced well this week and warmed up well before the game, but came out a different squad last night.

“We got a little bit too big-headed for ourselves,” he said. “If we play like that, it won’t be pretty. Charles Henderson is obviously, a good team, but we let them be a lot better than what they are. We can’t do that against Northview and Bayside Academy.”

Friday’s weather forced five local playoff series to be postponed until today. Each series has a doubleheader today and a... read more