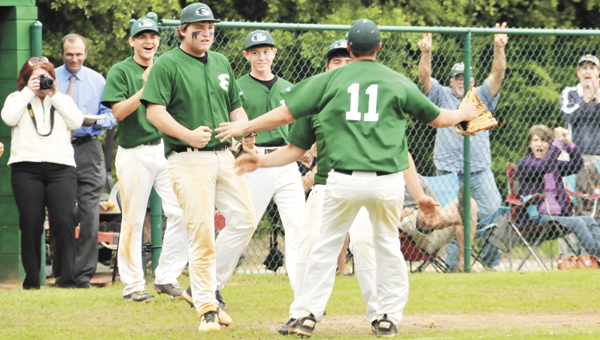 Florala’s five-run and five-hit third inning came at the right time for the Wildcats.

After taking a 5-1 lead, FHS pushed three additional runs across and went on to beat sixth-ranked Geneva County 8-4 on Monday at Stevenson Field in game three in the first round of the Class 1A state playoffs.

Ninth-ranked Florala (17-5) battled after falling 3-1 in game one to beat the Bulldogs 10-5 in game two on Saturday to force the must-win contest after rains delayed the round on Friday.

With this victory, the Wildcats advance to play fifth-ranked Brantley in the second round, starting on Friday.

“We got some key hits when we needed it,” Nall said. “That bunch (Geneva County) is good. Anytime you can beat them, you’ve done well. When you can beat them in a series — they’re well coached and they don’t make mistakes.”

The top of the third inning started when nine-hole hitter Austin West walked. Austin McNeill then hit a double to score West, and Avery McNeill and John Bess hit singles back to back.

Gavin McCurley hit a double to left that scored Avery and Austin scored on a passed ball to put the Wildcats ahead 3-1 with no outs.

Stephen Ratliff III hit a sac fly that scored Bess, who tagged up at third; and McCurley scored on Austin Franklin’s single to end the much-needed inning for FHS.

GCHS coach Clay Shearer said the third inning “wasn’t pretty,” and didn’t cause his players to play down the rest of the game.

A scrappy Geneva County bunch wasn’t about to give up anytime soon as the Bulldogs added two runs in the third to cut the game to 5-3.

Geneva County’s Corin Schuyten and Landon Lindsay hit back to back RBI singles to score Forrest Ryals and Kenneth Daniels in the bottom half of the third frame.

On the mound, Ratliff held the Bulldogs at bay in his four innings of work. He struck out two, allowed three runs on five hits and walked two for the win.

In the fifth inning, Ratliff had two runners on with no outs when Nall decided to bring in Andy Sanford.

Nall said Sanford threw for him during the doubleheader, and did a good job against the Bulldogs.

“I just felt like I was ready to make that move,” Nall said about relieving Ratliff. “(Sanford) said, ‘coach, I can get it done.’ To his credit, he did.”

Sanford pitched the final three innings, only allowing one run on two hits and striking out four to get the save. His only run came when Schuyten grounded out to third, which allowed Trenton Simmons to score.

“Our pitchers did well today,” Nall said. “We didn’t give a whole lot of base on balls, and we played solid defense. I think, if you do that, you’ll give yourself a chance to win.”

The Wildcats turned a key double play to end the scoring threat in the bottom of the third inning, and forced a runner out going home after Sanford came in during the fifth inning.

“I know this community, this school and their families are so proud of them, as I am,” he said. “We’re just looking to see how far we can go with this thing.”