Sex abuse victim: Talk to someone 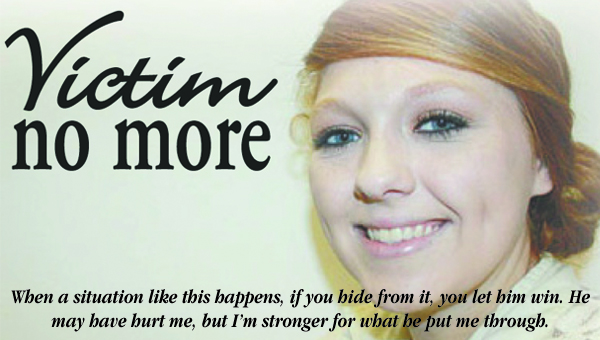 Amber Campbell is no longer a victim. She is a survivor.

It’s taken years of therapy to bring out her bright blue eyes and sparkling smile that were dimmed after being sexually abused by her father.

Today, she has a message for others suffering similar ordeals – speak up.

“When a situation like this happens, if you hide from it, you let him win,” Campbell said. “He may have hurt me, but I’m stronger for what he put me through.

“So, my advice – talk to someone, anyone,” she said. “Don’t hold it in. It will just eat at you every single day. Ask for help.”

Campbell’s abuse began slowly in 2004 when she was 9, she said, and the courts agreed, convicting her father, Darrell Sean Campbell, of first-degree sexual abuse in 2010. The abuse stopped in 2009 when he was arrested, she said.

Campbell said she realized the total wrongness of her situation one day while watching a “To Catch a Predator”-type TV show.

Campbell spoke slowly, and without anger Wednesday as she described her experience.

“It started with a kiss, and then, it escalated to touching, to groping, almost to the point of sex, but not quite,” Campbell said. “It went on for years, until I had a meltdown at school (as a freshman) and I just lost it and told.”

Friends informed the school’s band director, who informed the school counselor – both mandatory reporters under the law. An investigation began, and Campbell was removed from the home. Her three brothers stayed behind in the home the family shared with their father and grandparents, she said.

Those brothers, she said, are the reason that, when her father pleaded to abusing her, Campbell said she agreed to a 10-year split sentence for him. He received a year’s credit for time served and spent another year in prison. He is now out, serving the remaining eight years on probation. Under law, he is required to register as a convicted sex offender and prohibited from living in the same household as a child.

“He’s their father,” she said. “He did those things to me. Not to them. He’s the only dad they’ll ever have.”

Campbell went to live with a friend’s family in Andalusia, who introduced her to a local counselor, Emma Cosby. Because of years of therapy, Campbell said she’s in a good place in her life, but it wasn’t an easy journey.

At first, the therapy centered on Campbell’s self-esteem and how to make her feel good about herself.

“(Therapy) helped me to understand that what happened was not my fault,” she said. “And that was hard, but I get it. Now, it’s all about making goals for myself.”

Campbell talks about the two of the first goals in the past tense – feeling good about herself and setting goals for a functioning relationship.

“When (abuse) happens, it messes you up in the head,” she said. “You don’t think right. You don’t have any idea of how someone is supposed to love you and support you, and you don’t know how to do that for someone else. I get it now.”

At 19, Campbell has made painstaking strides to overcome her abuse. She has a boyfriend, a job and is looking forward to one day being the one sitting in a chair, helping a child through the same ordeal she survived.

Ashlyn Stacey takes a turn at bat. It was nothing but smiles and laughter Tuesday as the Covington County Miracle... read more