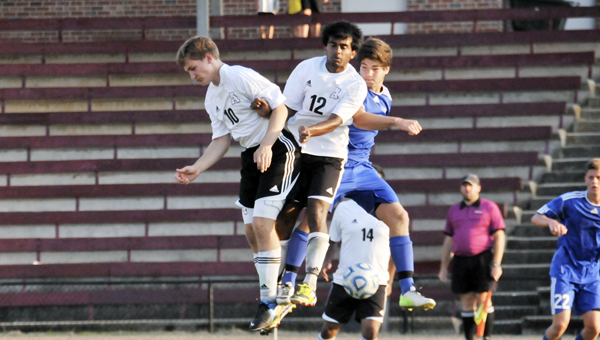 Andalusia’s soccer team is already looking to the future.

The Bulldogs will graduate six starting seniors from this year’s squad, but will have plenty of young talent rising up to replace them in the coming years.

A few years from now, Bulldogs senior Hiren Patel confidently said AHS will field a team who can become a dynasty.

That team will have to wait to rear its head as the present Bulldogs fell to a more-talented Bayside Academy 3-2 tonight in the first round of the Class 1A-4A substate playoffs at Andalusia Municipal Stadium.

Patel said after the loss that Bayside Academy was just a better team and that they knew how to play the game.

“They’ve got a lot of skill,” Ramsden said. “They’ve obviously got a lot more talent than us. Really, we handed the game to them with two really poor goals. The first one was an absolute nightmare. The second goal, we should’ve cleared it. The third goal, we were out of position. We really handed it to them by making some stupid mistakes on defense.”

The first goal Ramsden was talking about came within the first two minutes of the opening half.

Bayside Academy’s Nick James ran around a charging goalkeeper in Chris Smith, who was advancing in the box, and put the ball in the back of the net for the lead.

With the game at 1-1 after Bayside Academy’s Gaines Minton scored an own goal, the Admirals regrouped and took advantage of a defensive mishap to go ahead 2-1, where Minton made up for his mistake for the second goal.

At halftime, the Admirals held a 2-1 lead.

More than 11 minutes into the second half, Andalusia evened the match with a nice “set piece” on a free kick.

Bayside’s Thomas McLendon drew a yellow card, and Patel launched the ball to a waiting Kevin Rooks, who jacked the ball in the net, causing a massive celebration on Andalusia’s bench.

“Obviously, the second goal was a great set piece,” Ramsden said. “It was thought out and very impressive.”

The Admirals didn’t back down from the fight, advancing on Andalusia’s side of the field with ease.

Bayside put the game away at the 23rd minute when Chris Johnson headed the ball in on a nice cross from the 30-yard line.

Ramsden said the Bulldogs knew they were going to struggle offensively, but “we thought the defense was going to do their part.”

“For the most part, they did, but they made some stupid mistakes,” the coach said. “I’m more than disappointed that the end of the season is here. To play like that and have a season like this, means a tremendous amount.”

The Bulldogs won the right to host the first round of the Class 1A-4A substate playoffs by winning their area.

Ramsden said the program will get better, and that it’s going to take time.

“We’ve got some younger ones coming up, and we’ve always known that this program will get better the more years we have,” he said. “Next year, we’re going to have a younger team and not those stars (Smith, Hiren and Hiten Patel) that we had this year. But, that just means more opportunities for the younger ones.”

Ramsden thanked the City of Andalusia for providing the facilities to play on, the Andalusia City School system and board for their support, and the parents for allowing their children to give so much of their time to soccer this year.

Johnson to live out dream in NFL