Johnson to live out dream in NFL 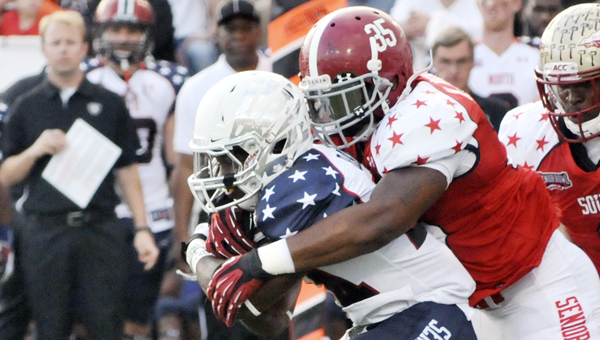 Nico Johnson was drafted by the Kansas City Chiefs today in the 2013 NFL Draft. | Andrew Garner/Star-News

Nico Johnson didn’t get much sleep during the past three days.

Tonight, he can rest easy.

Johnson was drafted by the Kansas City Chiefs today as the second pick in the fourth round of the 2013 NFL Draft.

The draft began on Thursday. Like so many other players, Johnson had two wait the first two full days of the draft for his phone to ring.

Johnson said it was a “frustrating” experience and is elated to be named a Chief.

“I’m glad that the Chiefs chose me to give me and opportunity to get out there,” Johnson said. “I’m just ready to go and prove myself to them, and to the opponents who bypassed me and show them that they could’ve had a great linebacker.

“I’m going to Kansas City and going to do my best there,” he said.

The Kansas City Star’s website projects the former Alabama senior as an inside linebacker, the position he knows so well.

In fact, Kansas City runs a similar defense as the Crimson Tide, he said.

Johnson was drafted as the 99th overall pick, one behind former USC quarterback Matt Barkley, who went to Philadelphia.

Right now, Johnson is getting fit and training in Andalusia and Tuscaloosa in preparation for the Chiefs’ mini camp. Johnson reports to Missouri Western State University on May 9.

During the draft, the Chiefs signed veteran free agents Akeem Jordan and Zac Diles, who like Johnson, will compete for the starting spot.

“The only thing I’m sure of is that I’ve got to bust my butt and earn my keep,” Johnson said.

Wildcats come up short in 2nd round

Brantley’s Clay Haws tags Florala’s Stephen Ratliff out at second base during the second round of the Class 1A state... read more