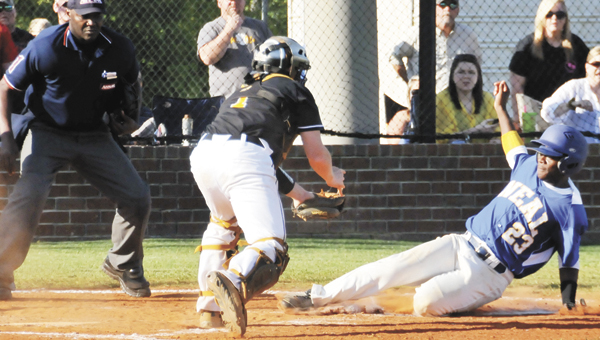 Opp made W.S. Neal beat them at their own game on Friday night.

After handing game one away 7-0, the Bobcats rallied from a 3-0 deficit in game two with two runs in the sixth inning and had the tying run at second base in the seventh with two outs.

The runner from second base never made it past third, as OHS fell 3-2 in a sweep to the top-ranked and still-undefeated Eagles during the second round of the Class 3A state playoffs.

“Second one (game) was a tough one,” OHS coach Michael Cassady said. “We gave the first one away. We didn’t make plays in the first one when we needed to. When you don’t make plays and give them extra outs, good teams capitalize and that’s what they did.

In Opp’s first game, the Bobcats committed two costly errors that netted two unearned runs in the top of the first inning. From there, the Eagles went on to score five earned runs on six hits. OHS tallied three hits in game one.

Game two was a different story.

W.S. Neal struck first in the bottom of the opening inning and the game stayed that way until the fifth, where Eagles’ second baseman Dylan Godwin hit a two-run double to make it 3-0.

Opp’s two runs in the sixth came off of a hard RBI single up the middle from Jacob Johnson, and an RBI walk to Holt Hall.

Earlier in the second game, Opp had a good opportunity to tie the game up at 1-all, but the Eagles turned a double play off of a tag out at short to end the threat.

“In the second game, they had to beat us,” Cassady said. “We played well. We did enough things right.

“We should’ve won and we didn’t push runners across like we should have,” he said. “They made some baseball plays. They had a double play and got them out of a big inning (in the fifth).

Cam Blackmon threw a four-hitter in 5.2 innings, while striking out four batters.

Godwin led the Eagles and went 1-for-3 with two RBIs.

Late in game two, Settle came in for the final out to get the save for Blackmon.

W.S. Neal’s Damian Williams and courtesy runner Joel Musgrove scored on the second error of the first inning in game one.

The Eagles added one run in the third on an RBI single from Brian Settle.

WSN let the air out of Opp’s tires in the fifth with a three, earned-run inning.

Miles Rowell started the inning off getting hit by a pitch, and later scored on a sac fly from Jeremy Myers.

Christian Purvis scored later in the inning when Godwin connected on an RBI bunt single. Williams scored the last run on an RBI ground out by Tyler Joyner.

WSN added its last run in the seventh on an RBI double from Williams.

Settle pitched a two-hitter in six innings for the win. He struck out six.

Williams went 3-for-4 with an RBI to lead WSN.

WSN coach Coy Campbell said it was a good series.

“Opp has got a good ball club,” Campbell said. “We talked about when you get to the second round, everybody is good. They proved that today. Our kids just don’t quit. (The second game) could have very easily went the other way. Like I said at the first of the year, I would take this bunch of kids over anybody. I am just extremely proud of them.”

WSN advances to face American Christian in the state quarterfinals next week.

Florala is taking its playoff series to a game three — again. The ninth-ranked Wildcats split with Brantley on Friday... read more