Wildcats come up short in 2nd round 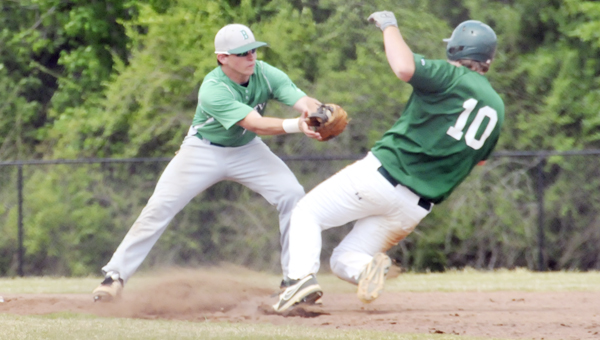 Brantley’s Clay Haws tags Florala’s Stephen Ratliff out at second base during the second round of the Class 1A state playoffs today. | Andrew Garners/Star-News

FHS struck first in the top of the first, but the Bulldogs surged to a 4-1 lead on a three-run home run, which was sort of reminiscent to their start and win in game two Friday night. BHS got the lead early in game two on a two-run home run.

Today’s tiny lead was all BHS needed as it went on to turn three double plays to hold Florala and advance to the Class 1A state quarterfinals, where the fifth-ranked Bulldogs will face Maplesville.

“We came up a little short,” Wildcats coach Bubba Nall said. “It was frustrating.”

Things started getting frustrating early in the first inning for FHS when Brantley took advantage on a disputed error.

With two runners on and one out, Brantley’s Alex Prescott launched a three-run home run over the left-field fence to put the Bulldogs ahead 3-1. Clark Kilcrease later added an RBI double to score Jud Owens, who reached on an error to give the Bulldogs their 4-1 lead.

“We couldn’t get out of the first inning,” Nall said. “They got four on us right out of the shoot, and we battled and hung in there.”

For the Bulldogs, getting off to a good start today was in response to their coach — Greg Evans — challenging them.

“After we lost the first game (Friday night), I said we’re going to find out how mentally tough we are — are going to fold or come back with our backs against the wall?” Evans said. “They responded the way I was hoping they’d respond.”

In the third inning, Florala cut the game to two runs on an RBI single from Avery McNeill, that scored his brother, Austin all the way from second base.

Brantley (19-13) started its second double play in the fourth inning when shortstop Jacob Free tossed the ball to second baseman Clay Haws for the force out at second. While Florala first baseman Stephen Ratliff was sliding into second, his hand got caught in Haws’ throw to first for the second out.

Florala countered in the bottom half of the fourth with its own double play.

BHS had bases loaded with no outs, and managed to squeak only two runs across.

The first was on an RBI double from Free to score Haws. The second run scored was on the Wildcats’ 6-4-3 double play and the Bulldogs led 6-2.

When Brantley turned its third double play in the fifth inning, the Wildcats’ sails went limp.

Evans said his team’s will to turn three double plays today was out of nowhere.

“It depends on if we show up,” Evans said. “If we show up, then yes, I expect (the double plays). Baseball’s a funny game. It’s one day, you look like the bad news bears and the next, they look like a major league team. Was I surprised? No.”

The Wildcats were, and Nall said Brantley’s play on the field was the difference of the game.

“They played great defense,” the Florala coach said. “I’m proud of this baseball team. They ended up being 18-7. That’s twice as many wins as we had last year and one fewer loss than we had last year. That says a lot for the seniors on this team, as well as the underclassmen. I’m just real proud of them. We wish Brantley all the luck in the world. They’re a class bunch over there.”