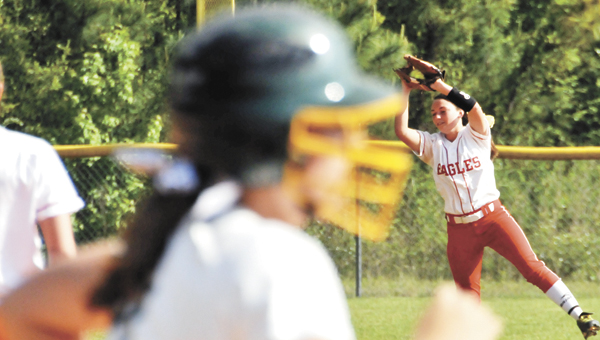 Hitting can be contagious.

Pleasant Home’s Lady Eagles put together three hits and scored one run in the bottom of the seventh inning to top Florala 5-4 in their opener of the Class 1A, Area 3 softball tournament on Monday.

The Lady Eagles had a comfortable 3-0 lead going into the fourth inning, Florala roared back to tie the game at 3-3.

Hanging in there and with all of the momentum, the Lady Wildcats tied the game up again in the top of the fifth to put the game at 4-4.

Pleasant Home’s Caitlin Jernigan hit the game-winning single to score Abigail Kelley, who reached on a monster double with one out.

Anna Bulger came up after Kelley, and hit an infield single to put runners at second and third after she second.

With the win over FHS, the Lady Eagles (15-15-1) earned a berth to play in their 13th straight South Regional Tournament. Florala defeated Red Level in two games to stamp its ticket to regionals.

PHS coach Bradley Stephens lauded his team’s ability to play in the regional tournament for a 13th straight time.

“That’s huge,” Stephens said. “I didn’t realize it was 13. There are not many programs where they can say they’ve been to the regional tournament 13 times consecutively.

“(Softball is) in the blood down here,” he said. “They play and work hard at it.”

Lady Eagles pitcher Taylor McGhee earned the win in 2.2 innings of work. McGhee, who came in to relieve starter Abby Walker in the fifth inning, retired the next four batters in order to swing the momentum back in the right direction.

McGhee allowed no runs on one hit and walked two.

PHS got on board early in the first inning on an inside-the-park home run from Jernigan. Her hit sailed over the left fielder’s glove and with her quickness, advanced home on the throw in.

Helena Weaver knocked a rising pitch over the left-field fence with two outs in the bottom of the second to push the Lady Eagles to a 2-0 lead.

In the third inning, Kelley scored on Raven Woods’ RBI single to give PHS its 3-0 lead.

With one out, Florala made its come back in the top of the fourth inning.

Lily Ritzel got a bunt single down, and stole second base with Lyndsee Edwards at bat.

Ritzel would later score on Callie Wise’s fielder’s choice, and Edwards came in on a squeeze to put the game at 3-2.

Keadra Avan then hit a single after Wise, and stole second to put runners in good scoring position.

Samantha Hammac then laced a single to right that scored courtesy runner Haley Maxey to tie the game at 3 apiece.

“It just got to a point where we were just trying to rush to make plays and stuff,” he said. “It was just like a rush, rush, rush instead of calming down and playing ball like we know how.”

Pleasant Home went ahead 4-3 in the bottom of the fourth when courtesy runner Emily Byrd scored on an error.

The Lady Wildcats had a good scoring opportunity in the seventh after Grace Cox and Bailea Rickett reached on a single and walk, respectively to start the inning.

Kendyl McDaniel popped up to third, and then Rickett was forced out at second on a steal try from first to make it two outs with Rizel at bat.

Ritzel then reached on a fielder’s choice, but didn’t go anywhere as Edwards popped up to third for the final out.

FHS coach Pat Maddox didn’t really know what to say about the loss.

“It was a great game,” Maddox said. “It was within our reach. We left too many on bases in critical times. It’s a good thing (today’s) a new day.”

Kelley scored the game-winning run in the seventh off of Jernigan’s hit with one out.

Stephens said it was good to see the girls persevere and get hits.

“We haven’t done that in a while,” he said. “It was great. Abigail got a good hit — turned on it well.

“Then, Anna got up and hit the ball, and then Cailee, all she had to do was make contact,” he said. “She hit the ball hard. Good things happen when you hit the ball.”

Because of Florala’s wins over Red Level, the Lady Wildcats will face Pleasant Home today at 4 p.m. in the area championship game. FHS needs to win two times to claim the title.

Maddox said he believes his girls have a chance to win today.

Ritzel got the loss, pitching a complete game while allowing five runs on seven hits and striking out 10.

Jernigan went 2-for-4 with an RBI to lead PHS.

Straughn’s Brooks Rabren shot a 2-under 70 to finish as the low medalist of the Class 3A Sectional Golf Tournament... read more