Five alumni will be honored with the Andalusia High School Outstanding Graduated Award at homecoming 2013.

Anthony, who graduated from AHS in 1964, retired as chairman of the board of Synovus Financial Corp., a regional banking company headquartered in Columbus, Ga., with banking offices in five states. He currently resides in Birmimgham.

Fornaro, who lives in Hayden, has been a journalist and a public relations executive. She was the first director of public relations for Volkert & Associates, Inc. (now Volkert, Inc.), from which she retired after 27 years. She was a 1961 graduate of AHS. 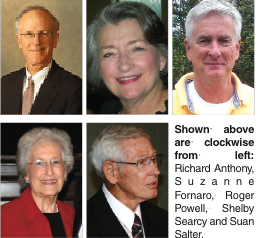 Powell, a 1972 AHS graduate, recently retired after 24 years as Covington County’s circuit clerk. He also is an artist, and has lent his artistic talents to many charitable causes. He lives in Andalusia.

Salter is a retired educator who has worked tirelessly to promote AHS as a founding member of the Class of 1948 Scholarship Foundation, and as the immediate past chairman of the Outstanding Graduate Committee. She lives in Panama City Beach, Fla.

Searcy is a 1947 graduate of AHS who returned to teach and coach at his alma mater from 1955 until 1965, and was an administrator from 1966-1973. He later was superintendent of schools in Butler County, Ala., and Union City, Miss. He currently lives in Greenville.

Time’s speeding up on me

The sweet days of summer are nearly upon us. It seems like just yesterday we were getting ready to put... read more