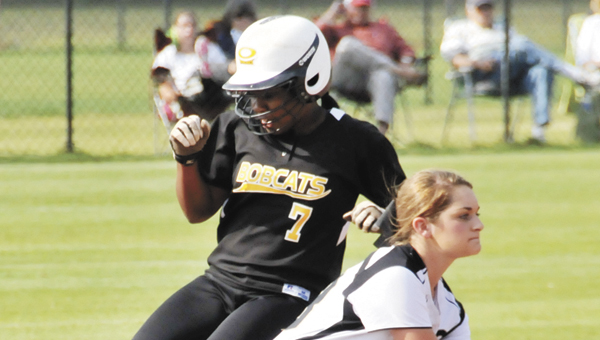 Opp’s Octavia Thompson runs safely into second base during the Lady Bobcats’ win over Straughn in area action this season. OHS has won four tournaments this season. | Andrew Garner/Star-News

Opp has won four regular-season softball tournaments so far, and the Lady Bobcats are hopefully looking to add to that total.

OHS defeated Class 2A’s seventh-ranked Wicksburg 3-1 on Saturday to win its fourth tournament this season and Elba’s Tune Up Tournament.

“Fortunate” is what OHS coach Jimmy Reeves used to describe his team’s success this season after winning their fourth tournament this weekend.

“I guess we’ve been real fortunate and played well during those tournaments,” Reeves said. “That tournament Saturday had 18-teams there. So, we’re real proud of that. There were some really good teams over there.”

The other tournaments Opp won this season was Andalusia’s annual outing on March 8-9; the tournament at Ariton on April 6; and Pleasant Home’s annual tournament, which was held April 18-20.

The Lady Bobcats could have five tournament wins under their belts.

Opp was in the championship game with Brantley in Straughn’s annual KLD Tournament, but rain washed the game and the rest of the tournament action away.

Earlier on Saturday, the ninth-ranked Lady Bobcats beat Brantley 6-2 in the quarterfinals, and won 3-2 over Kinston in the semis.

Reeves had a simple explanation as to how the girls beat Wicksburg (in the tournament championship) and Houston Academy.

“We scored more runs than they did,” he quipped. “We played real good defense and had great pitching. Anytime we win, we usually play like that. My pitchers were outstanding.”

Reeves said he split up his pitching staff, where each would pitch two to three innings per game.

“That seemed to help us with our defense,” he said. “We scored enough runs to get by.”

This week, OHS is gearing up for the Class 3A, Area 2 tournament at SHS. The Lady Bobcats will face Excel at 9 a.m. on Thursday to start the all-day tourney.

Reeves said right now is the time for tournament ball.

“We’re trying to emphasize that our area and our regional and our state is tournament ball, and that’s what this sport is about now,” he said. “We want to win them all, hopefully.

“I think we’re developing into a tournament team,” he said. “We hope.”

How about some spring training action?

You can view the Bulldogs running through drills here: AHS ST 1 read more