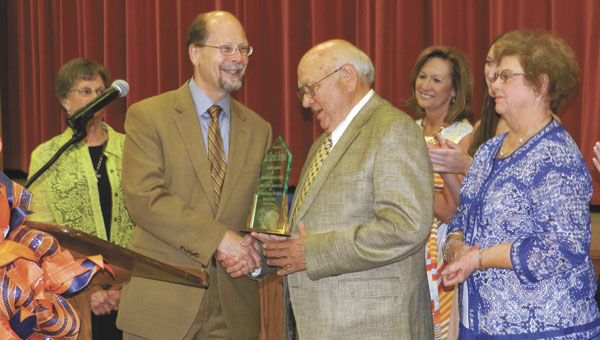 Harold Sorrells was heralded at a retirement luncheon yesterday as a man who has quietly made a difference and been “a rock” for his community.

Gene Vonderau, former director of the Alabama Trucking Association, said he had known Sorrells for years, but learned much more about him when he signed on to help Buddy Moore Trucking assess the company before it acquired it.

“I came in on Sunday morning, camped in the driver’s room and interviewed drivers,” he said. “I talked to about 70 MSJ drivers, and I learned some things.”

He said drivers told stories of being behind on their mortgages, needing expensive care for really sick children, needing a roof on a house or a motor in a truck. Time and again, they told him, Sorrells helped.

“That is how he is,” Vonderau said. “I don’t know how many drivers he helped. Most of them paid him back, but not all of them.”

Mizell Memorial Hospital CEO Jana Wyatt said the hospital was honored to have Sorrells as a member of its board for 21 years, many as president or an officer.

“There was never a doubt how much he loved the hospital and the community of Opp,” Wyatt said. “He set the bar high.”

She said he always was and still is the first to contribute to the Mizell Foundation’s annual gala.

“We’ve been through some tough years,” she said. “In some of those years, his generosity made employee Christmas gifts possible.”

She said it’s not unusual to bump into him in the hospital “visiting a friend, an MSJ employee, or just checking in on us.”

LBWCC diesel mechanics instructor Eddie Spann said Sorrells has been “the biggest supporter of a our program.”

“Without his help, we wouldn’t have made it,” he said.

Spann said Sorrells’ generosity is second to none.

“A few summers ago, I had five students who were going to have to drop out,” Spann said. “I didn’t know where I could get tuition for those students. One was high risk.

“He heard about it from somebody else,” Spann said. “All of a sudden, I got a check in and all five were covered.

“That very high risk student had been incarcerated. Had that student dropped out, he would have gone back. But he called me recently and told me he just made shop management ,and he’s about to get his bachelor’s degree. Man, what a success.

“Mr. Sorrells has never asked me who I helped,” Spann said, adding that one of Sorrells’ favorite sayings is, “You can’t out give God.”

Sorrells graduated from Opp High School in 1955, and immediately joined the Navy. He spent four years in the military, and began driving his first truck in 1959. He was involved in numerous trucking ventures throughout his career, and established MSJ Trucking – named for his daughters Missy, Susan and Julie – in 1996.

He has served on the boards of Southrust Bank of Covington County, CCB Community Bank, Mizell Memorial Hospital, the MacArthur State Technical College Foundation and the Opp Chamber of Commerce. He is a former Rotarian and a deacon in First Baptist Church.

Sorrells said, “I didn’t do anything, but what I thought was right.”

“I am so proud that many years ago, a governor of this state – Gov. Wallace – saw the need for trade schools. Trades are so important. They are the backbone of our economy,” he said.

He said he and others worked for many years to get a truck driving program established in Opp, adding that he foresees shortages of drivers in the future.

“If 75 percent of trucks stopped today, within 48 to 72 hours, there’d be no groceries on the shelves,” he said. “Within five days, no manufacturing working because of on-time delivery. They don’t have supplies on hand. Ninety-eight percent of everything you touch has been trucked. There’s only one thing that could stop the economy quicker, and that’s electronics.”

Sorrells said he believes success is paying your bills on time and providing your family with what they need.

“Not what they want, what they need – a place to live, eat, and clothes to wear,” he said. “Some people think money is what you need, but there are a lot of places to put that money to use, help somebody continue to help themselves.”

Don Dupree, the new owner of Strikers, poses Monday inside the former Boland Lanes in Andalusia. With new owners and... read more