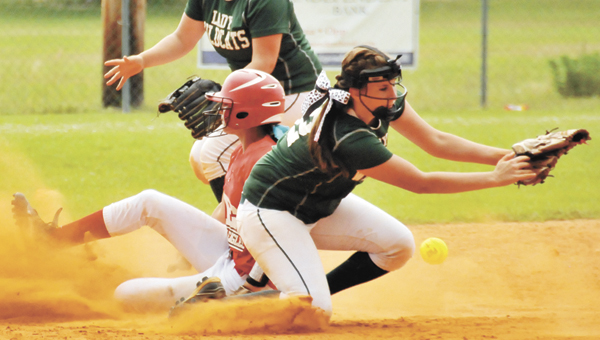 Pleasant Home scored 12 runs combined in the third and fourth innings as the Lady Eagles beat Florala 13-0 to claim the Class 1A, Area 3 softball championship on Tuesday night.

Twelve of the Lady Eagles’ 15 hits were recorded in the final two innings of the five-inning affair.

Things started going Pleasant Home’s way in the third inning when Anna Bulger, Caitlin Jernigan, Raven Woods and Brianna Dozier hit four singles in a row. Woods’ single scored Bulger from third, and Dozier hit a monster to left that scored Jernigan and Woods to make it a 4-0 game.

With two outs later in the inning, Helena Weaver hit a single to left that scored Dozier. Weaver later came in on Abby Walker’s triple to left to give PHS a healthy 6-0 lead.

PHS coach Bradley Stephens said it was a “matter of time” for the girls to connect on some hits.

“Like I told them (Monday), it’s a matter of time. I’ve just been waiting,” Stephens said. “When one starts going another starts going. Hitting’s contagious.”

When asked what sort of adjustments were made, Stephens said the girls were more patient at the plate. In fact, most of Pleasant Home’s hits were with a one or two-strike count.

With this victory, the Lady Eagles enter the Class 1A South Regional Tournament next weekend in Gulf Shores as the top seed from their area. PHS will face the runner up of area 4 in the first round. Florala (17-17) faces the winner of area 4.

PHS made good defensive plays behind Walker, who threw a no hitter in five innings for the Lady Eagles.

Her only blunder was allowing two walks.

“She got the ball on the ground, and our defense played well behind her, which is what we had to have,” Stephens said.

Woods, Dozier and Weaver went 3-for-3 each to lead PHS. Woods and Dozier accounted for three RBIs each, and Weaver had two.

Bulger and Jernigan went 2-for-4 each; and Walker went 2-for-3 with two RBIs.

Anna Harrelson’s RBI single in the top of the 12th inning was just enough to push Opp to a 1-0... read more