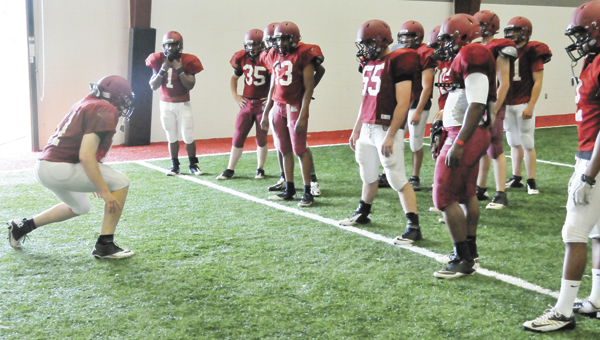 Andalusia rising senior Daniel Henderson (left) instructs fellow linebackers on how to not get called for a false start during a game Tuesday afternoon. | Andrew Garner/Star-News

Whistles, coaches shouting and the sound of colliding pads can be heard echoing out of Andalusia’s physical education indoor practice facility over the past few days.

The Bulldogs started their spring practice on Monday and have been going hard at it with an aggressive nature, especially on the defensive side of the ball, AHS head football coach Brian Seymore said.

“It’s a work in progress,” Seymore said. “You’ve got a lot of new faces. We’ve got some holes to fill defensively. We lost two defensive lineman and some quality linebackers, and some guys in the defensive secondary.

“I know we’ve got some guys who can take those roles, it’s just a matter of us finding the right fit for our defense,” he said.

Going into its annual spring practice period, which lasts a total of 10 days, Andalusia had a stellar off season, the coach said.

“We’ve been really satisfied with it,” Seymore said. “The kids worked in the weight room and got a lot stronger. That’s the goal anyway.”

Andalusia’s offensive showing the past few days has been a different story.

Seymore said since the guys have gotten a year older, they’ve started to understand the concepts being taught.

Many other folks may not agree with Seymore, but the Bulldogs’ coach said teaching the younger players a lot about football, while playing at a higher level, is a must.

“They’re learning on the fly right now,” he said. “To be honest with you, they haven’t been too successful, but that’s a part of it. I think that’s the learning curve they’ve got to understand.”

When asked what the big benefit of holding spring practice is, Seymore said it’s all about the players realizing how far they’ve come during the off season.

“Andalusia will still be hard at it for about six or seven more practices before playing its spring game against W.S. Neal and Northview of Florida on Sat., May 18.