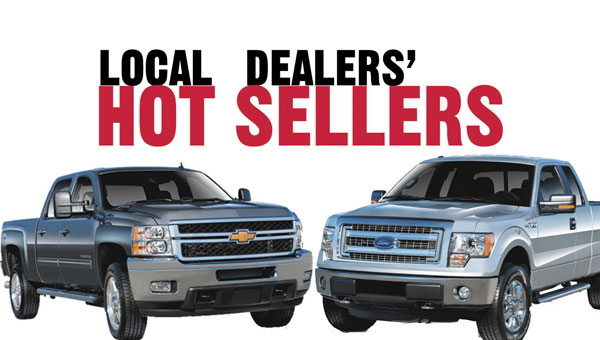 Major U.S. automakers all reported the best April for U.S. sales in at least five years, giving a good start to the spring car sales season.

General Motors reported April sales rose 11 percent from the same period a year ago, roughly in line with forecasts for the month. Sales of truck models, including pickups and SUVs, were 17 percent higher, while crossover sales were up 14 percent. GM’s car sales rose only 6 percent.

Johnny Jackson at J.M. Jackson in Opp said the news is in perfect timing with the June opening of their new dealership in Sanford.

“I agree; car sales are picking up,” Jackson said. “We’re excited about them being on the rise – particularly as we plan to move into a new location.”

Jackson said the site’s biggest sellers are the Chevrolet Silverado truck and the Buick Lacrosse.

Alan Lindsey of Andalusia Ford said trucks continue to be big sellers at the dealership.

“It was a great truck month for us,” he said. “We nearly doubled inventory because I’ve learned if you’ve got it, you can get it sold. But as far as cars go, our best selling model is the Ford Focus with its 40 miles to the gallon.”

Industry-wide, sales came in at an annual rate of 14.92 million units, according to sales tracker Autodata, up from 14.12 million a year ago.

Toyota Motor was the only automaker among the four largest not to report a sales gain. It was 1 percent below year-ago levels, which was far below forecasts. Alec Gutierrez, senior analyst at Kelley Blue Book, said a large part of Toyota’s problem is the loss of market shared in the midsize sedan segment, where its Camry is facing a much greater challenge from the Ford Fusion and Nissan Altima. Honda Motor reported a 7 percent sales increase and Nissan sales jumped 23 percent.

Even with the weak Toyota sales, industry-wide U.S. sales are forecast to come in at an annual pace of more than 15 million vehicles for the sixth straight month. Before this string of strong sales, the industry had gone more than four years without reaching that benchmark. The strong U.S. sales are a contrast to Europe, where the deepening recession has caused sales to fall to a multi-decade low.

Students of the Andalusia Ballet practice a maypole dance yesterday afternoon. The traditionally is danced on May 1, although in... read more