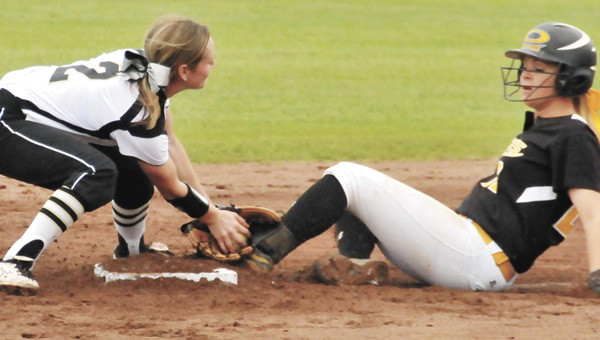 Opp won its first area championship in fast-pitch softball Thursday as the Lady Bobcats beat Straughn 14-4 in five innings in the Class 3A, Area 2 title game at SHS. Straughn’s Lady Tigers won the elimination brackets for the chance for a rematch with Opp and the right to advance to the Regionals.

Since the fast-pitch league was established in 2001, the Lady Bobcats have been without a title they’ve been coveting for many years.

OHS defeated Excel 8-2 in the first round to advance to the winner’s bracket finals, where it beat Straughn 3-0.

Straughn built a 12-0 lead in its first inning against Southside Selma, and went on to win 16-0 in its first game of the day.

The Lady Tigers went back and forth with Excel in the loser’s bracket finals, but prevailed in a 12-4 victory to reach the championship.

OHS went ahead 4-0 in the top of the first to start the title game on a good run.

Opp took a 6-0 lead in the top of the second on a two-run single by Reisnour.

Straughn (19-18) didn’t back down as in the bottom of the third, the Lady Tigers made it a two-run game on just three hits.

Bringing the game to 6-4 was big for the girls, SHS coach Trent Taylor said.

“We did some good things today all day long,” Taylor said. “We kind of got back to hitting the ball like we did early in the year.”

After the top of the fourth, OHS led 11-4, thanks to Laiken Free scoring on an error; Chatham’s RBI single to score Cayla Hughes; Anna Harrelson’s RBI single that scored Tori Puckett; Savannah Gerber’s RBI double; and a passed ball play.

In the top of the fifth, Free started the inning with a solo home run to left. Laura Kate Young reached an error. Another error later, Hughes made her way in.

With Straughn’s 12-4 victory over , the Lady Tigers earned a berth to play in the Class 3A South Regional next week. SHS will face W.S. Neal in the first round at 9:30 a.m. on Friday. Opp faces T.R. Miller at the same time.

In the winner’s final, OHS led 1-0 in the top of the second and 2-0 in the third inning. Chatham hit a stand up double to start the fourth, and later scored on a squeeze to give OHS its 3-0 lead.

Erica Ladson hit a two-run single; Hughes scored on a bunt single; Gerber scored on throw to second; and Kelley Pierce scored on a throw away to third. EHS made it 5-2 in the top of the fourth on a home run and single.

The Lady Bobcats added one run in the bottom of the fifth on a Harrelson RBI single; and two runs on Free’s two-run double in the sixth.

Andalusia, Straughn and Opp will be competing for the right to go to Gulf Shores today in their respective area... read more