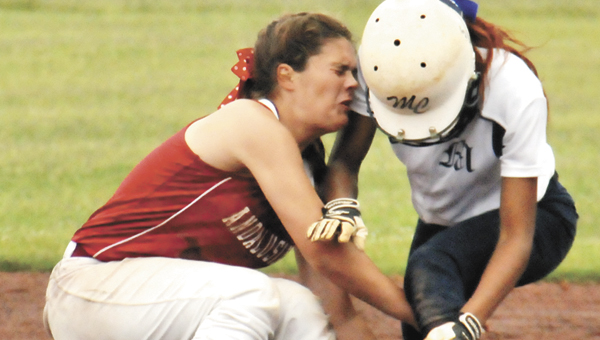 Andalusia cruised through its area tournament Thursday as the Lady Bulldogs beat Monroe County 10-0 to win the Class 4A, Area 2 title at the Dwight Mikel Sports Complex.

The Lady Bulldogs were lethal throughout the day on defense, only allowing one run to cross the plate.

To start the day, AHS defeated Wilcox Central 16-1, and beat MCHS 13-0 in the winner’s bracket finals.

AHS coach Brad Garner said the girls accomplished a lot on the field of play.

“We played well and did what we’re supposed to,” Garner said. “We played solid.”

In the championship game, Andalusia got off to a slow start, compared to its other games.

The Lady Bulldogs went ahead 2-0 after an Emily Terry RBI single that scored Olivia Dixon in the bottom of the second inning.

Haley Snider and Andi Hughes hit two-run singles in the bottom of the fifth to give AHS its 10-0 lead.

Abbie Young had a great game on the mound, pitching a no-hitter in five innings. She struck out four.

“That last game I thought we got a little tired at the plate hitting the ball,” Garner said. “Still, we put 10 runs on the board. I think we’re getting better and better with our hitting.”

With their area championship win, the Lady Bulldogs will face the Area 1 runner up at 3:30 p.m. next Friday in the first round of the Class 4A South Regional at Gulf Shores.

The Lady Bulldogs went ahead 6-0 in the first inning in their 13-0 victory over MCHS in their first meeting.

AHS added one run in the second, two in the third and three runs in the fourth.

In the bottom of the fourth, Tori Cleghorn knocked a two-run double to make it 13-0.

It’s going to be all about business next week — no vacation, Garner said.

“I really feel like after the past week and a half or so, we can go down there and compete and do something good,” the coach said.