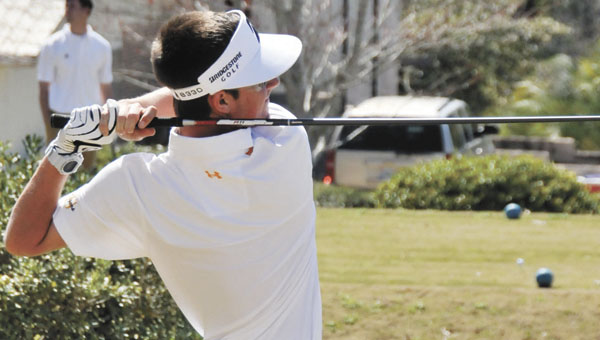 Straughn’s Brooks Rabren and the rest of the Tigers feel they have a good chance to secure a state tournament berth Tuesday at substate. | File photo

When Straughn sophomore golfer Brooks Rabren isn’t in school, there’s a sure bet you’ll find him on the golf course.

Brooks and his father, Doug, traveled to Arrowhead Country Club in Montgomery on Friday to play a practice round to prepare for the Class 3A substate tournament on Tuesday.

Rabren and the rest of the Straughn Tigers golf team advanced after putting up a second-place finish in the sectional tournament.

On the final hole of his round, Rabren bogeyed, but finished as the low medalist of the tournament with a 2-under-par 70.

It felt good, as a team, to make it to the substate round, Rabren said.

“We were pleased with the way we played,” he said.

When asked what his thoughts were on the substate tournament, Rabren was unselfish in his assessment on how he thinks the team will do.

Rabren said Arrowhead is in really good shape for the upcoming exhibition.

“The greens are really looking nice and rolling well, which gives you an opportunity to make puts,” he said. “It’s a hittable course.”

SHS golf coach Mike Kelly said he feels pretty good about the Tigers’ chances of advancing to the state round.

“Out of the other four teams coming in from Tuscaloosa, the best team shot a 329 (at the sectional tournament),” Kelly said. “We shot a 310, and Bayside shot a 305.

“There are only three moving on this time,” he said. “Hopefully, we’ll shoot the score we shot last time and move on.”

Rain is expected to be in the forecast this weekend, according to the National Weather Service.

If it rains a lot this weekend, then the course will play a lot longer, Rabren said.

“You won’t get as much roll,” he said when asked if the weather can affect a round. “Other than that, the weather doesn’t really change it that much, unless it rains pretty hard while we’re playing.”

If Rabren were to shoot a low-enough round on Tuesday, then this will be his first time to qualify for the state tournament.

Advancing to the state tournament has been a long-time goal for the sophomore.

“It’s been a goal of mine since I started playing high school golf,” Rabren said. “We have a really good chance this year.”