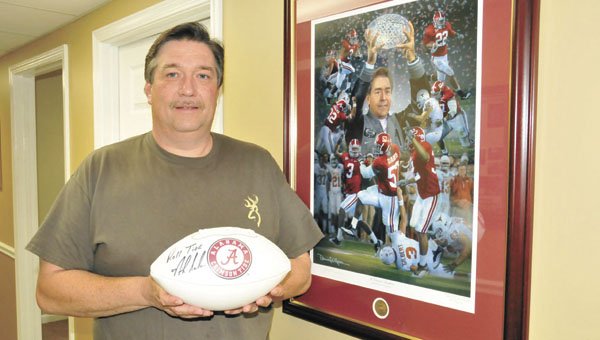 Presented by the Andalusia Football Foundation, the boil is the foundation’s main fundraiser, and it will be held at Kirkpatrick Park from 5:30 p.m. until 8 p.m.

In addition to the crawfish, there will be potatoes and corn, Snowden sausage and for those who don’t eat the popular seafood, boston butts will be available. Kids under age 10 get free hot dogs.

Tickets are still available from those who are selling them, Andalusia Football Foundation president Alan Williamson said.

“Tickets are selling faster at this time than they were last year,” Williamson said. “We’re doing free hot dogs this year. We want to make it more of a family event.”

Williamson said Anthony Clark of Florala will cook the crawfish.

“It’s a pretty unique experience because the guy comes in on a wagon and cooks them on the spot,” he said. “That’s pretty cool. He brings the kettles in and does everything on the spot. So, they’ll be nice and hot and fresh. They are live when they hit the water. It’s something pretty cool to see.”

This year, the foundation will use the money raised for two facets — a $1,000 scholarship to a football athlete at AHS who has the highest GPA, and for a new synthetic sports rake.

The scholarship award will be given out at Andalusia’s awards day, Williamson said.

As for the rake, the foundation thought this tool was necessary because of the high volume of traffic the new physical education facility has seen since its completion last year.

“We helped build the facility and didn’t realize that there is maintanance that has to be done on that particular type of turf,” Williamson said. “We’ve contacted some turf companies and are looking into what they call a synthetic sports rake. It actually raises the turf.”

The rake will also clean the turf, Williamson added.

A demo of the new rake will be conducted on Monday at the facility and sometime soon after, the foundation will make the decision to purchase the rake, the president said.

Additionally, the boil will hold an auction for an autographed football by Alabama head coach Nick Saban.

“We just hope this thing is going to grow,” Williamson said. “We just want this thing to get bigger.”