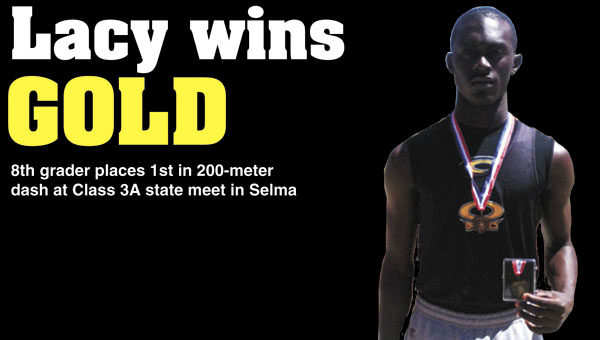 Orlando Lacey didn’t really care that the runners next to him were juniors and seniors.

All the Opp eighth grader cared about was crossing the finish line first on Saturday at the Class 3A state track and field meet in Selma.

Lacey ran his heart out for the Bobcats, garnering the state championship in the 200-meter dash in Selma’s Memorial Stadium.

The Opp Middle Schooler ran a finals time of 23.44 seconds, beating out Chris Smith of Hanceville and Blake Rivera of Deshler, who finished second and third, respectively.

“It was exciting,” Lacey said. “It felt good to win one.

“I knew it was going to be a challenge,” he said. “I was confident and knew I could run with them.”

“Orlando placing first in the 200 meter is a blessing,” she said. “He’s a very talented athlete.

“God has truly blessed him.”

Additionally, Lacey competed in the boys 100-meter dash, and placed third to bring home the bronze.

On Friday, Crenshaw secured a second-place finish going into the finals.

“She did really well,” Dickerson said about Crenshaw. “It was pretty big for her placing in the top 10.”

“They’re strong competitors,” he said. “We had a couple miscues, but it comes along with experience.”

The disqualification in the 4×100 relay came after the Bobcats were riding first place in the meet.

Brian said, fortunately, the Bobcats will have everybody returning for the 2014 season.

From the tie, the tournament was reverted to the tiebreaker rule, which gave Gibbs the silver and Rogers the gold.

LBWCC’s Katy Messick (1), Courtnee Meyers (4) and A.C. Riley meet at the mound during an earlier game this season. |... read more